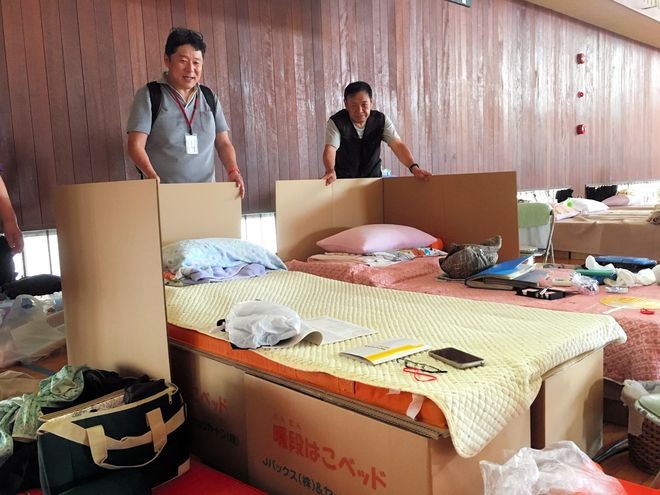 Yoshihiro Mizutani, left, explains how to set up partitions between cardboard beds in July 2018 in city-run Kusuna Elementary School in Hiroshima’s Minami Ward, which was flooded by torrential rain. (Asahi Shimbun file photo)

YAO, Osaka Prefecture--When he heard about evacuees losing body heat and falling ill while sleeping on the cold floors of evacuation shelters, Yosihiro Mizutani thought his company could provide them with a much-needed lift.

Mizutani, 48, president of corrugated box maker Jpacks Co. here, quickly created a prototype of a simple bed made of cardboard to prevent the body temperatures of evacuees in shelters from dropping.

Working with a doctor in Ishinomaki, Miyagi Prefecture, he contacted on Twitter, Mizutani distributed his cardboard beds and received high praise.

To allow users to assemble the beds more easily, Mizutani developed a new version consisting of six large boxes that have smaller cardboard boxes within to boost the bed’s strength.

The improved model can be set up within 15 minutes without the need for a utility knife and does not break down even if up to 20 adults stand on it.

Mizutani provided the design drawing of the cardboard bed to the Japan Corrugated Case Association (JCCA) free of charge, so that cardboard makers across Japan will send their cardboard to shelters during natural disasters.

Mizutani said many local governments refused to accept his invention at first just because “there are no precedents,” so he, as well as a physician and others, collected data on health conditions of evacuees to show that cardboard beds would be useful.

Due to such efforts, use of cardboard beds was included in the state’s guideline on evacuation center management in 2016. Agreements have been concluded with 32 prefectures and more than 300 municipalities to provide the beds in the event of emergencies.

“The good track record that I worked hard to establish has resulted in the current outcome,” Mizutani said.

When torrential rains resulted in the severe flooding of a wide range of areas in western Japan in summer 2018, the gymnasium of an elementary school in Hiroshima that was used as a shelter was lined with Mizutani’s cardboard beds.

Mizutani briefed evacuees on how to assemble the beds at the shelter.

With partitions installed between the beds, evacuees could not only maintain their body heat but also sleep without worrying about being seen by others, reducing their physical and mental burdens.

Cardboard beds are currently in use at heavily crowded evacuation centers throughout the nation due to the JCCA’s promotion efforts.

Jpacks, which was established in 1951 and sells cardboard in the Kinki region, is updating its website to enable individuals and private companies to purchase its cardboard beds. The prices start from 7,980 yen ($71.70), excluding tax.

The latest model can be set up within four minutes without any adhesive tape. The new cardboard bed can be kept in a box measuring 60 centimeters tall, 108 cm wide and 27 cm long before assembling.

Although cardboard beds account for only 2 percent of Jpacks’ total sales of 500 million yen, Mizutani believes the disaster relief item is very important for his company.

“The product has value that cannot be represented with figures,” he said. “I want to continue producing it for a long time for the benefit of disaster victims.”