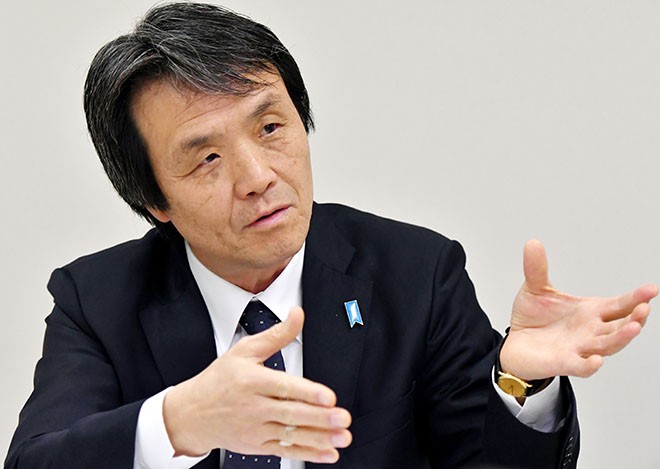 Repatriated abductee Kaoru Hasuike says he doubts that North Korea will resort to more ballistic missile launches or nuclear tests after the failure of the second U.S.-North Korea summit meeting held in Hanoi in late February.

Rather, he says the failure of the two sides to find common agreement will keep the door open to further talks in the future. At the same time, he says Japan has likely missed its chance, for now, to resolve the abduction issue once and for all.

Hasuike, 61, now an associate professor of Korean language and culture at Niigata Sangyo University, spent 24 years in North Korea as an abductee. He and his girlfriend were snatched from their hometown of Kashiwazaki, Niigata Prefecture, in 1978. The couple married in North Korea and were allowed to return to Japan in 2002.

The Asahi Shimbun interviewed Hasuike to get his opinion on how he thinks North Korea will act from now on, and his thoughts about resolving the issue of Japanese nationals abducted decades ago.

QUESTION: The second U.S.-North Korea summit meeting ended without any agreement. What's your take on that?

ANSWER: It was unexpected. I think North Korean leader Kim Jong Un's level of demand was too high. Also, U.S. President Donald Trump had frustration over issues involving Russia and other matters. Kim seemed to think that if he proposed scrapping the nuclear facilities in Yongbyon, it would effectively lead to the complete removal of economic sanctions. But Trump caught him off-guard by raising the issue of another nuclear facility. I think that threw Kim.

Q: Do you think there is any chance that North Korea will resume ballistic missile launches or nuclear tests?

A: I don’t think so. In April 2018, Kim said that North Korea had achieved the goal of “byungjin" (parallel development) that pursued both nuclear development and economic reconstruction. He declared its termination and changed his policy to one that devoted all of his country’s energies to economic development. The resumption of missile launches or nuclear tests would mean a return to the byungjin line that Kim has already stated was won. Kim wouldn't be able to maintain trust (in his leadership) if he was inconsistent like that. That's not how it works in North Korea.

Q: How do you foresee the future of U.S.-North Korea negotiations?

A: Immediately after the (second) U.S.-North Korea summit meeting, North Korean Foreign Minister Ri Yong Ho stated without batting an eyelid that the United States sought (the demolition of) “another” nuclear facility, in addition to the complex in Yongbyon. If he was going to deny the existence of nuclear facilities other than those in Yongbyon, he would not have said that.

He apparently realized that North Korea cannot avoid holding talks (on another facility) in the future. This shows that the summit meeting was not a failure, but one in which the two leaders were unable to reach agreement. I think that U.S.-North Korea negotiations will continue.

But time will be needed to rethink the strategy for negotiations. So, I suspect they will be stalled for the time being. During this time, I think it is likely that North Korea will explore the U.S. strategy while stirring things up by resuming activities at its nuclear- or missile-related facilities that are under the surveillance of U.S. satellites.

Q: Do you think it is possible that North Korea will move to strengthen its relations with South Korea?

A: In a speech he gave on March 1, South Korean President Moon Jae-in showed his receptiveness with talking to the United States about resuming tourism at Mount Kumgang in North Korea and business activity in the country's Kaesong industrial region. Kim Jong Un probably thinks he can leave economic cooperation between the two Koreas to South Korea. That’s because South Korea will seek to persuade the United States from the standpoint of North Korea. But, in the current circumstances, it will be difficult for Kim to visit South Korea.

Q: North Korea’s (state) media, reporting to the people back home, put a positive spin on the (second) summit meeting even before it started.

A: The leadership may have felt it necessary to present a diplomatic achievement as the domestic economy is in a serious situation and dissatisfaction with the policy of “denuclearization” is smoldering in the military.

Q: Isn’t it possible that the (North Korean) people will react to the result negatively, given the gap in media reports prior to the start of the summit meeting?

A: I think that an air of “disappointment” has spread (in the country). The market economy is now a permanent feature in North Korea. Since it has become impossible to export coal, iron ore, processed textile products and seafood due to sanctions, (the economy) has suffered a serious blow.

The removal of sanctions is something that will directly affect the daily lives of the people. If sanctions are removed, North Korea will be able to sell its products to China and elsewhere. The money earned will help maintain people's daily lives.

When I was forced to live in North Korea, it took quite a long time for information to spread through word of mouth because of the tight controls that were in place. But the situation is different now. Many people secretly possess mobile phones that can be used with electric waves coming from China across the national border. I think that information can now spread across the country in the space of a week or 10 days or so.

In North Korea, businesses are becoming bullish. People who became wealthy are now an important layer to support the regime. The regime would suffer a blow if they are dissatisfied. As North Korea was not able to win removal of sanctions in the summit meeting this time around, some people may be purged. That could roll back the policy of resorting to dialogue.

Q: Now that U.S.-North Korea negotiations seem to have stalled, do you think that will affect the chance of talks between Japan and North Korea toward resolving the abduction issue once and for all?

A: I cannot help but think that the prospect of Japan-North Korea talks has become more remote for the time being. North Korea will concentrate on negotiations with the United States as the talks have been plunged into a critical situation.

If North Korea can agree on scrapping its nuclear-related facilities, negotiations will enter the second stage, where the disposal of nuclear weapons, economic cooperation and normalization of diplomatic relations will become agenda items. Then, Japan will be able to start talks with North Korea. But, until then, Japan should continue to send messages (on its standpoints).

Q: What policies should Japan take in its talks with North Korea?

A: Japan should convey a strong message that the normalization of diplomatic relations and economic cooperation will not be realized unless the abduction issue is resolved. North Korea wants to improve its economy, but does not want to depend on China further. It does not want to be absorbed and unified by South Korea. The thought is incorporated into the recent slogan, “My country, first.”