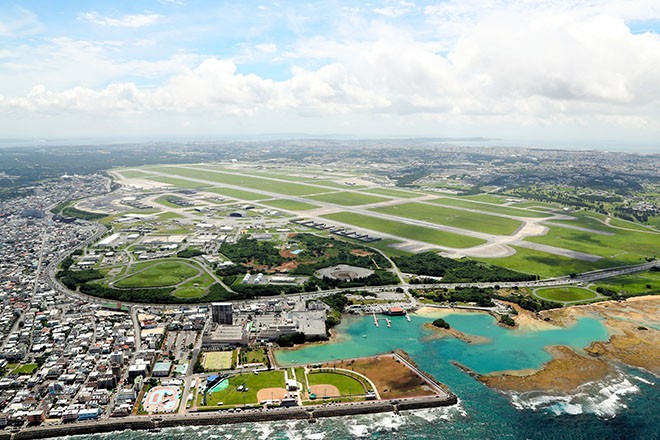 NAHA--The deafening roar of jets using a U.S. military base in Okinawa Prefecture triggers fatal heart attacks in 10 local people on average each year, according to an estimate by a researcher.

In addition, 17,000 or so residents living close to the Kadena Air Base develop health problems due to difficulties in sleeping because of the high noise levels.

The base, one of the U.S. Air Force’s largest installations in East Asia, is co-hosted by the central municipalities of Kadena, Okinawa and Chatan.

The estimate was announced by Toshihito Matsui, a professor of environmental health at Hokkaido University, who was visiting Naha on March 13.

“Measures to restrict flights must be implemented as there is an unmistakable health hazard, including death, by living near the base,” he said.

Matsui's estimate was based on World Health Organization guidelines for assessing noise damage that were revised last year.

Matsui’s research showed that 17,454 residents live in a zone categorized as one with a high degree of sleep deprivation due to average noise levels in excess of 40 decibels between 10 p.m. and 7 a.m.

Residents affected by excessive noise levels are not limited to the three municipalities, and include those living in the nearby city of Uruma.

Matsui said people in the zone are more prone to health risks because of the aircraft noise.

He used the WHO guidelines and the mortality rate of heart disease patients across Japan for his estimate of those who develop cardiac infarction or other heart diseases due to the noise, along with people who die of heart attacks triggered by the noise.

The results showed that 10 people die annually from heart disease due to the noise at Kadena Air Base.

Noise levels monitored by the Kadena town government, located near the facility, averaged 60.2 decibels between April and February. The nighttime average was 50.5 decibels.

The WHO guidelines recommend that each government take measures to keep daytime noise to within 45 decibels and nighttime noise within 40 decibels.

“The damage is not just from jets taking off and landing, but also due to work to adjust engines at Kadena Air Base,” Matsui said.