Zero chance of Futenma base being returned by fiscal 2022 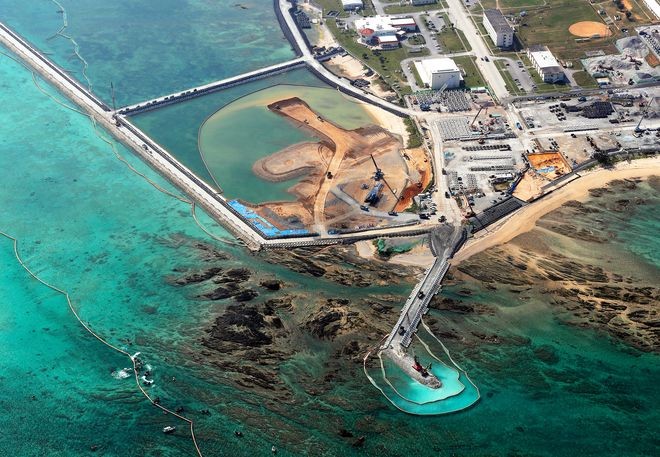 A Japan-U.S. agreement for the return of land occupied by a key U.S. military base in Okinawa Prefecture by fiscal 2022 has zero chance of materializing, despite the start of reclamation work for a replacement facility.

This prospect emerged with a report submitted to the Diet by the Defense Ministry on March 15 that said foundation improvement work at the new site in the Henoko district of Nago, Okinawa Prefecture, will take three years and eight months.

The land reclamation work at Henoko will allow for the eventual relocation of the U.S. Marine Corps Air Station Futenma from Ginowan.

However, the seafloor in the area has been found to be so porous that additional work to strengthen the foundation is needed before land reclamation can proceed.

Even if the foundation improvement work is begun immediately, the time frame in the report means that work will not be completed until November 2022.

In April 2013, Japan and the United States agreed on a time table for returning land used by U.S. military bases in Okinawa Prefecture located south of Kadena Air Base, which covers Futenma. The agreement said the land would be returned to Japan in fiscal 2022 or later. The United States insisted on including the "or later" wording because it was reluctant to designate a specific deadline.

A major condition for returning the Futenma site was that base functions be relocated to the Henoko district of Nago.

Drilling tests conducted at 76 points in the waters to the northeast of Camp Schwab in Nago between 2014 and 2018 led to the latest report, which said some areas of the seafloor had been found to be weaker than initial estimates and could affect the stability of any subsequent embankment work unless the foundation was strengthened.

The Defense Ministry will have to submit a request to revise design plans for the Henoko area to proceed with the foundation improvement work. That will likely come about by the year-end at the earliest.

That would mean a protracted legal battle between the central and Okinawa prefectural governments. While the outcome is far from certain, it does mean that the Futenma relocation to Henoko will once again be delayed by a number of years.

The latest report was compiled by a private-sector company commissioned by the Defense Ministry to look into the state of the seafloor in the Henoko area. It followed the Defense Ministry's request to the land minister last October seeking a temporary injunction of the August 2018 revocation by the Okinawa prefectural government to its earlier approval to proceed with land reclamation work at Henoko.

The Defense Ministry submitted the same report to the land ministry in January, and again to the Diet on March 15 after opposition party directors of the Upper House Budget Committee asked for it.