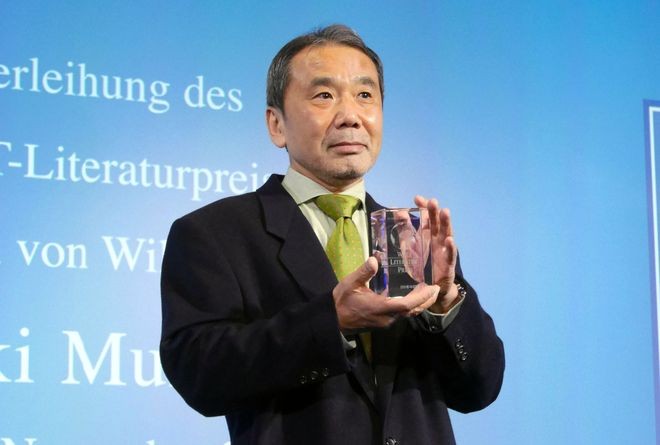 Internationally acclaimed novelist Haruki Murakami’s “1Q84” was voted the best book published between 1989 and 2018, according to a survey conducted by The Asahi Shimbun.

The leading daily sent questionnaires to those who contribute book reviews to newspapers and weekly magazines to look back on the Heisei Era (1989-present) with publications.

Responses were collected from 120 experts, each of whom gave five points to their top choice and one to four points to lower-ranked titles.

In the ranking, “1Q84” earned the most points, while “The Wind-Up Bird Chronicle,” also written by Murakami, was 10th.

In an interview with The Asahi Shimbun, Murakami talked about the Heisei Era, as well as his journey as a writer and his books.

Q: “1Q84” and “The Wind-Up Bird Chronicle” garnered support from many intellectuals as books representing the Heisei Era.

Murakami: Soon after the Heisei Era began, in January 1991, I was invited as a visiting lecturer at Princeton University and went to the United States. It was just around the time when the Gulf War started and the atmosphere was heavy in America, and I started writing “The Wind-Up Bird Chronicle.” I remember I had a strong sense of starting over.

It had been stressful for me after “Norwegian Wood” (1987) became an unexpected bestseller at the end of the Showa Era (1926-1989). I left Japan, met no Japanese people and holed up (in my room), and I was able to finish the book without distraction. “Wind-Up Bird” is a symbolic and ambitious novel even for me. What’s most important is “wall-penetrating.” After thinking for a long time, the protagonist is connected to another world. Deep in his psyche, he finds a doorway. The “wall-penetrating” that was first introduced in “Wind-Up Bird” unleashed my novelistic imagination and became a detonator for the story.”

Q: It is a work that shows your stance toward portraying violence and fundamental evil.

Murakami: Once, someone told me that there were no evil in my novels, and it made me think a lot. That I wanted to depict evil in the form of pure concept. Dostoyevsky, Balzac and Dickens, they are all good at portraying evil. I had longed for them. I myself lacked a sense of evil, but I tried hard and put my imagination to work, and I had a feeling like I was beginning to see evil inside me. It is an important work in that sense.

Q: Then, both the Great Hanshin Earthquake and the sarin gas attack on the Tokyo subway system occurred in 1995.

Murakami: One could argue that 1995 was a turning point for me. The earthquake in Kobe also ruined the house I grew up in. I decided to cut short my stay in the United States and return to Japan as I thought I ought to say something about the earthquake and the sarin attack. I personally believe that all that matters for novelists is their works, and that their works won’t do any good if they only say the right things. But it is also true that writers are citizens, and they need to do the right things as citizens while they maintain their identities and standards as novelists. But it is important to maintain balance without ruining your imagination by making fair arguments all the time.

Q: “Underground: The Tokyo Gas Attack and the Japanese Psyche,” a non-fiction book in which you interviewed victims of the sarin gas attack on the subway, was published in 1997.

Murakami: During the interviews, I carefully listened to their stories, starting from their backgrounds. I wanted to know their births, school lives, families, marriages, workplaces ... and how the sarin incident served as a piece (of a puzzle) in their lives. I tried to absorb their stories and bring the right things to the surface without expressing my thoughts. I was also criticized for not expressing my opinions, but I think the result was good.

Q: “After the Quake,” which was published in 1999, is a collection of short stories that seems to be influenced by an earthquake.

Murakami: I followed two principles: that I wouldn’t set the story in Kobe; and that I wouldn’t bring the earthquake directly to the fore. I tried to put direct things aside to write the essence, and refrain from saying what I wanted to say and let the story speak for itself. I think it has become all the more versatile because nothing is written in concrete terms. For example, Yugoslavian people can find their civil war in the story. It can be replaced because the essence is the same. With “Underground” and “After the Quake” positioned in the middle of the Heisei Era, they clearly showed my direction to move forward as a novelist.

Q: Your books seem to be read across the world after tragedies.

Murakami: I don’t know why, but my books seem to be read especially when what we had before suddenly collapsed or disappeared. I feel that (my books) began to be essentially accepted in Japan around the time when the Heisei Era started with the death of the emperor, the asset-inflated economy collapsed and the Great Hanshin Earthquake and the sarin incident occurred.

What I wanted to write most in “Kafka on the Shore” (2002) was the disturbing vibration. I think many people feel it in the present world. What’s important is to see the world through the perspective of the protagonist, a 15-year-old boy. It is during this period when people are yet to fully understand things and the world, but they are willing to understand them. Getting rid of transcendent things brought by adults and then seeing the world. What’s important is how things look, how they sound and how the vibration from them is felt, not things themselves. What I want to do is to have readers establish the essence of things from the sum (of those perceptions). It is like a joint work between me and readers.

Q: Your “wall and egg” speech for the Jerusalem Prize (2009) and another speech for the International Catalunya Prize (2011), during which you mentioned the nuclear accident triggered by the Great East Japan Earthquake and tsunami, caused a stir.

Murakami: When you can’t decide which is good or bad, I’ll think about what’s important. It is a novelist’s job to speak up about how much damage nuclear plants caused to people, rather than saying directly that the plants must be abolished. But much like our society today where populism has gained a certain momentum, there are things we must say. We are in a time when people clearly show where they stand, and it is often the case that people’s comments are regarded as predictable. I don’t want to be one of those people. It is difficult, but I’ll say my ideas in a condensed manner when I have to.”

Murakami: The common ground between “1Q84” and “Wind-Up Bird” is that I started writing the third part almost as soon as I wrote until the second part. It held together as a novel. But I won’t give a conclusion. “1Q84” is part of a long story with causal explanations like Sanyutei Encho’s “rakugo” comic story “Shinkei Kasane-ga-fuchi.” You don’t know things like how Tengo’s father and mother met, do you? What happened to Tengo and Aomame after they went to Costa Rica, and about their daughter? I actually have completed a story. But just like omitting the root from the chord in jazz, I want to leave blanks. I like mandala-like things, in which another story is connected by a mysterious tunnel.

Q: How do you feel about the disturbingness of society?

Murakami: I feel that not a few people do things driven by fear and anger. The anger and fear lying deep in their consciousness. It is not a good motivation that drives people. Of course, there are many people driven by their good intentions and right consciousness, but it is very difficult because sometimes evil and good are intertwined. I felt the same after the September 11 attacks. There is also a trend in which some people deliberately try to conceal the fear and anger. Like those revisionists who claim that the Nazis had no gas chambers. When you write stories, you must not look away from it.

Q: I feel that in our society today, we can’t really see what is good or evil.

Murakami: I don’t use social networking services, but when I take a look at them, it feels strongly creepy because I don’t understand what people are thinking. I think the power of story that beats and dispels that creepiness is important. No matter how pathetic and dark their situations might be, they express (their opinions) in sleazy words. Writing and words are scary. They can be sharp weapons. Maybe many people don’t realize how scary they can be, or are intentionally trying to use them as weapons. It is a difficult problem. And I think that it is a challenge imposed on writers, especially storytellers and us novelists, to find out how to deal with it.

4. “All She Was Worth” by Miyuki Miyabe

7. “Guns, Germs, and Steel: The Fates of Human Societies” by Jared Diamond

8. “The Housekeeper and the Professor” by Yoko Ogawa

9. “‘Minshu’ to ‘Aikoku’” (Democracy and patriotism) by Eiji Oguma