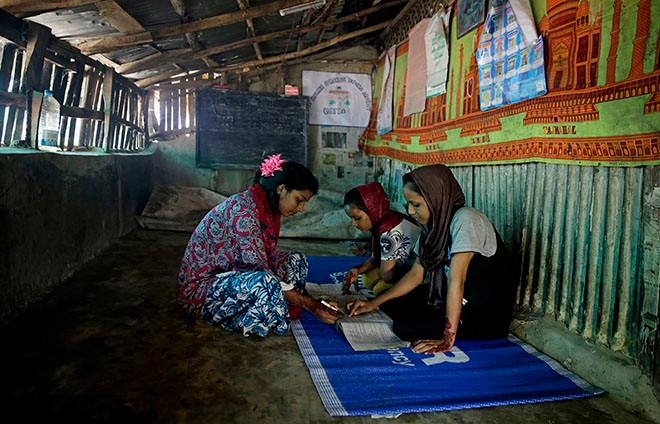 Rahima Akter, left, teaches her siblings inside the family hut in Kutupalong refugee camp, in Bangladesh on Aug. 22, 2018. (AP Photo)

COX'S BAZAR, Bangladesh--Sixteen-year-old Kefayat Ullah walked to his school in southern Bangladesh in late January, as he had done most days for the previous six years, to find that--despite being one of the top students in his class--he had been expelled.

A government investigation had outed him, along with dozens of his classmates, as a Rohingya refugee, a member of the mostly stateless Muslim minority from neighboring Myanmar.

"Our headmaster called us into his office and told us that there's an order that Rohingya students have no rights to study here anymore," said the teenager, a small boy with cropped hair and a faint mustache. "We went back home crying."

For years, Bangladeshi schools have quietly admitted some of the Rohingya who live as refugees in sprawling camps on the country's southern coast, and whose numbers have swelled to more than 1 million since violence across the border in 2017. But the new influx has tested the hospitality of the Bangladeshi government, leading them to apply tighter controls on the population.

The recent expulsions highlight the struggle of hundreds of thousands of children desperate to study in the world's largest refugee settlement, but at risk of missing out on crucial years of education and the chance to obtain formal qualifications.

More than 730,000 Rohingya fled Myanmar after a military campaign in late 2017 that the United Nations has said was executed with "genocidal intent." Thousands more, like Kefayat, were born in Bangladesh after their parents fled earlier waves of violence.

Though Myanmar says it is ready to welcome back the refugees, northern Rakhine state, from where they fled, is still riven by ethnic tensions and violence, and the U.N. has said conditions are not right for them to return.

In some countries, governments allow refugees to study in local schools, allowing them to gain recognized qualifications, or permit institutions in the camps to teach the national curriculum. But Bangladesh has not recognized the vast majority of the Rohingya as refugees and does not issue birth certificates for those born in the camps, making their legal status unclear.

The government has also forbidden centers in the camps from teaching the Bangladesh curriculum, according to the U.N. children's agency, UNICEF.

"Many students are depressed and frustrated," said a 21-year-old who asked not to be named because he was continuing to pass as Bangladeshi so he could go to university.

"Yes, we are somehow pretending to be Bangladeshi students. Yes, we have got some education. But now, where will we go? The world should think about this: if we can't study, our future will be damaged. We are hungry for education."

In the headmaster's office at Leda High School, piles of textbooks inscribed with the names of some of the 64 expelled students lay stacked in a corner.

"We are very sorry and disappointed about the decision," said the principal, Jamal Uddin. "The government is providing everything for the Rohingya--why not education?"

But others were relieved. Eighteen months on from the start of the crisis, and with no resolution in sight, some local people are losing patience.

In the grassy playground of the school, its founder, 48-year-old Kamal Uddin Ahmed, said the arrival of the Rohingya had been a massive upheaval for the local area.

"How do you think I feel?" he said. "We don't mind the Rohingya, but we mind our lives."

Intelligence officials who visited said it was "not safe for the country, not safe for our people" to have Rohingya in schools, he said.

Rohingya have been accused by some of bringing drugs and crime to Bangladesh.

In a letter to local headmasters dated January, Bangladesh's Refugee Relief and Repatriation Commission Chief Abul Kalam said that an intelligence report on the situation had been filed with the prime minister's office in November.

"It has been seen the trend of Rohingya children's participation in getting education has been increasing," Kalam said in the letter, seen by Reuters, adding that some Rohingya had obtained fake Bangladeshi identity documents through "dishonest public representatives."

"It is advised to monitor strictly so that no Rohingya children can take education outside the camps or elsewhere in Bangladesh," he said.

Asked about his order to expel Rohingya children from local schools, Kalam said they were getting an education from learning centers in the camps.

But many children and their parents say the hundreds of learning centers operated in the camps by international NGOs and the U.N. offer mostly unstructured learning and playtime.

Bob Rae, Canada's Special Envoy to Myanmar, who has also traveled to Bangladesh, said Bangladesh authorities including Sheikh Hasina "have emphasized that the refugee camp is supposed to be 'short term' and that to talk about schooling beyond learning centers for very young children would risk giving the impression, to Myanmar and the world, that camps were there to stay."

In the camps, many children study by themselves from tattered textbooks carried from Myanmar or purchased at local markets, where stalls ply a swift trade in copies of the Myanmar curriculum smuggled across the border. Recent fighting in the region has made imports tougher, one stall owner said.

"There are many Rohingya who can't get the Myanmar curriculum--we are doing this so we can help them," said 20-year-old Nurul Ansur, the Bangladeshi proprietor of a print shop which specializes in copies of the textbooks, pulling a copy of "Grade One Primer, Basic Education" from a filing cabinet.

A makeshift school staffed with Rohingya volunteer teachers opened in February, though the headteacher said they had no official permission to operate.

Karen Reidy, a communications officer at UNICEF, which leads education programming in the camps, said efforts were under way to adapt other countries' curriculums into a "learning framework" for refugee children.

"There's a risk in the camps that we will see a lost generation of children if we don't manage to catch them with education, with skills and training at this critical point in their lives," she said.

At Nayapara camp, the expelled students recounted stories from years of illicit study at the Bangladeshi schools. Some of their classmates were cruel, said Kefayat Ullah.

"They used the word 'Rohingya', 'Burma' to tease us," he said. "Nevertheless, we were happy. We need education."

One 15-year-old, Mohammed Yunus, said he had worked in a brick-field to pay for classes that his parents could not afford.

Kefayat Ullah had dreamed of graduating and becoming a journalist "to help our community." Now, he watches his Bangladeshi former classmates travel to and from class in their crisp white shirts.

"We feel sad when we see the local students studying in a nice place, quietly," he said. "Now we are always worried and thinking--what will we do?"