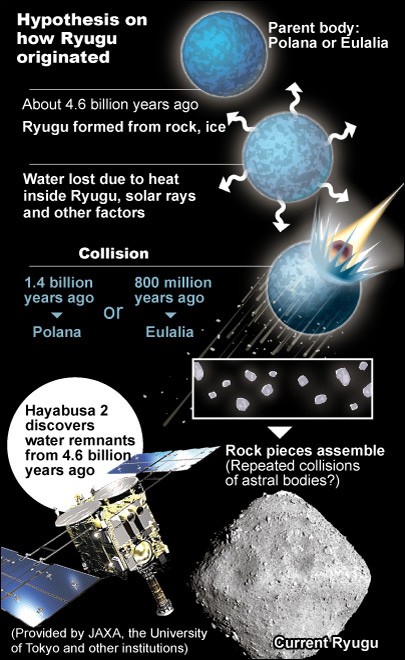 The Hayabusa 2 space probe has detected remnants of water components on the asteroid Ryugu, a discovery that could strengthen the theory that life on Earth originated from outer space, scientists said.

The minerals are believed to be the remnants of liquid water from an astral body that was formed 4.6 billion years ago and created the near-Earth asteroid Ryugu, the scientists said.

Research team scientists from JAXA, the University of Tokyo and other institutions concluded that either the Polana or Eulalia asteroid was the parent body of Ryugu. They reached the conclusion after examining Ryugu’s orbit and rocks on the asteroid located about 300 million kilometers from Earth.

Polana and Eulalia, which orbit the sun between Mars and Jupiter, measure 55 kilometers and 37 km in diameter, respectively. Ryugu is about 900 meters wide.

The researchers believe Polana collided with another space rock 1.4 billion years ago, while Eulalia and another object crashed into each other 800 million years ago.

The debris from either of the collisions could have reassembled due to gravity and developed into Ryugu.

Many scientists believe that asteroids rich in water and organic substances smashed into Earth and released the building blocks for life on the planet.

Seiji Sugita, a professor of planetary science at the University of Tokyo, said many discoveries concerning the origin of life on Earth could be made if Hayabusa 2 brings back many samples from Ryugu.

“We may be able to find out how much water was brought to Earth from asteroids and identify the kinds of organic substances they carried,” he said.

Hayabusa 2’s discoveries were published in the U.S. journal Science on March 20.