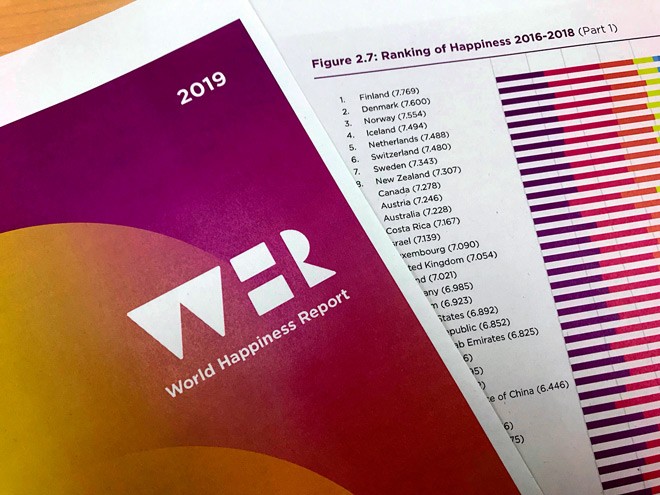 Japan was ranked 58th, its lowest level ever, in the 2019 edition of the World Happiness Report. (The Asahi Shimbun)

Japan is not such a happy place these days.

A global scale of happiness issued by the United Nations Sustainable Development Solutions Network ranks Japan in 58th spot, its lowest showing to date, and Finland in the No. 1 position.

Finland was followed by Nordic neighbors Denmark and Norway in the seventh edition of the World Happiness Report. Those countries also dominated the top three spots in last year's survey.

For four years in a row, Japan ranked with a figure in the 50s.

The survey started in 2012 and its results have been released every year except 2014.

Most of the countries that made the top 10 on the list are in Europe.

The United States ranked 19th. South Korea placed 54th and China was in the 93rd spot.

The survey canvasses the views of 3,000 or so respondents in each country or region.

They were asked to evaluate the quality of their lives on a scale of zero to 10. The latest report reflects the past three years between 2016 and 2018.

Japan ranked second in terms of healthy life expectancy, and 24th in per capita GDP. However, its 64th ranking in freedom to make life choices and 92nd spot in generosity lowered its overall standing.