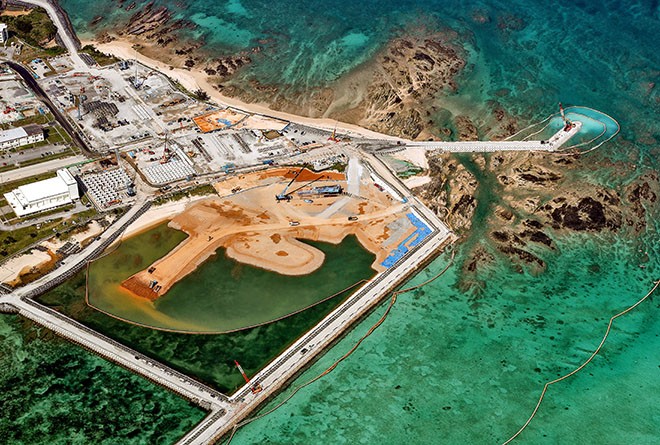 NAHA--The Okinawa prefectural government was preparing to file a lawsuit to halt land reclamation work in the Henoko district of Nago, Okinawa Prefecture, where a new U.S. military facility is being planned.

It will seek to nullify an earlier central government decision to invoke a temporary injunction on the prefectural government's retraction of previous approval of the reclamation work for the relocation of the U.S. Marine Corps Air Station Futenma from Ginowan, also in Okinawa Prefecture.

The suit will be filed with the Fukuoka High Court's Naha branch.

The decision was made after the central government informed prefectural government officials on March 22 that work will begin at a new section of the Henoko site from March 25.

Okinawa Governor Denny Tamaki met with Prime Minister Shinzo Abe on March 19 in Tokyo and asked for a suspension of the dumping of dirt and sand into the waters off Henoko as well as a one-month period for talks between the central and prefectural governments over the base relocation.

Tamaki had indicated that he would decide whether to file a lawsuit after determining the central government's response to his proposal.