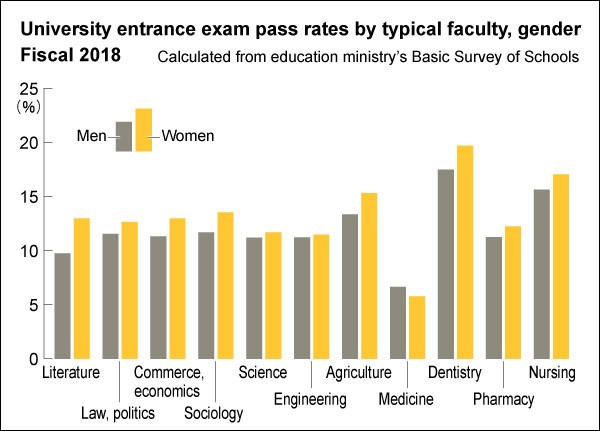 One of the lingering stereotypes about women in Japan--where gender disparity dies hard--is that females are good in non-science subjects but are weak in science.

Even the wildly popular Licca-chan doll had a character story saying that she is “poor at arithmetic” when she first went on sale in 1967.

That long-running and widespread myth, however, couldn’t be more different from the reality.

Women outstrip men in the ratio of successful entrance exam applicants for all university faculties in the fields of human and social sciences, such as literature and law, according to figures calculated from the education ministry’s fiscal 2018 Basic Survey of Schools.

And women are also found to be faring better in entrance exams to all natural science faculties except medicine.

Female applicants were outdoing their male counterparts by even larger margins in faculties of agriculture, dentistry, pharmacy and nursing.

For faculties of medicine, though, the pass rate for men, at 6.62 percent, was higher than for women, which was 5.73 percent.

“Women are making spectacular advances in science majors, traditionally seen as a forte of men, and especially in engineering,” said Kyoko Tanebe, a board member with the Japan Joint Association of Medical Professional Women. “Females are great pragmatists, and they are good at flexibly creating things that are needed.”

In a bow to the changing times, Licca-chan today no longer bemoans her arithmetic skills.

Tomy Co. manufactures the Licca, of which it says it has sold more than 60 million units in total.

“The Licca products we release have always been reflecting trends of the times,” said a Tomy representative. “The character setting was probably conceived as a story that endeared children of the time.”

As things now stand, Licca-chan is supposed to be a “cheerful, slightly impulsive fifth-grader” who loves red roses and making sweets.

While it remains unclear when precisely Licca-chan ceased to be “poor at arithmetic,” the Tomy representative said that description “spontaneously went out of use with changing times.”

A uniform set for decking out the Licca as a medical practitioner or a nurse is currently on sale, as a growing number of women aspire to be one of those medical professionals.