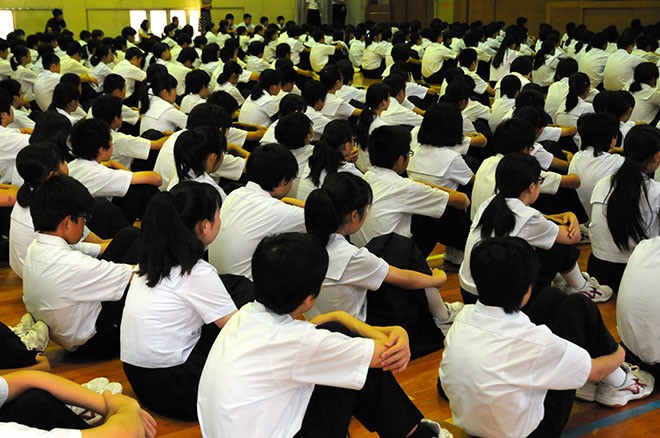 Junior high school students in Nagoya listen to a song about eradicating the scourge of bullying. (Asahi Shimbun file photo)

Distressing cases of suicide due to bullying underscore the need for schools and other organizations to step up their commitment to tackling this burning and intractable problem.

In many instances, teachers overlook signs from victims or even take actions that drive the youngsters to end their lives.

Such tragedies must stop. Teachers and other staff members need to redouble their efforts to prevent bullying and vigorously detect signs of trouble early on.

Two cases of suicides triggered by bullying have been scrutinized by investigative committees set up by local governments. The two panels recently published reports on their respective investigations.

One case that occurred at the end of 2017 in Amagasaki, Hyogo Prefecture, involved a second-year junior high school student who lived in the city.

Harassment against the girl began in her class and spread to her school activities club and postings on social media.

The victim repeatedly signaled her distress and deep sense of isolation in questionnaires distributed at her school and on other occasions. But none of the six teachers involved, including her class teacher, head-of-year teacher and adviser to the club, responded effectively.

Members of the club constantly squabbled and two teachers mistakenly believed that the bullying victim was spreading rumors about the conflict. She killed herself immediately after one of the teachers harshly scolded her over the matter.

The other case occurred in Toride, Ibaraki Prefecture, in autumn 2015. A third-year junior high school student in the city killed herself after enduring months of bullying by her classmates.

Teachers failed to recognize she was victimized by bullying. When she and two of the bullies regularly harassing her were late for a class, only the victim was scolded by her class teacher.

When school windowpanes were broken, the victim was held collectively responsible for the incident even though she was not at the site when the incident happened. She killed herself soon afterward.

More than three years later, the Toride municipal board of education deemed her suicide was not linked to bullying. Angered by the finding, her parents brought their claim to the Ibaraki prefectural government, prompting the authorities to take the unusual step of mounting an investigation.

The report by the investigative committee depicts the process in which persistent bullying caused the victim to sink into despair.

The two cases share common factors: insensitivity of the teachers involved and their unreasonable actions in dealing with the victims based on misunderstandings due to a lack of serious efforts to ascertain the facts.

Obviously, teachers have to engage in soul-searching in responding to such cases. It is vital to create a system to ensure that teachers and other members of staff at schools, including counselors, health nurses and clerical workers, remain alert to signs of bullying, pay serious attention to what students say and share relevant information.

It is also important to establish organizations that can respond to bullying cases outside school.

The city of Kawanishi, Hyogo Prefecture, for instance, has established a body called “Ombudsperson for Children’s Human Rights,” which is a counseling and rescue organization based on a municipal ordinance.

It deals with a wide range of school-related cases, including bullying and non-attendance, in response to requests from children and parents who are not content with the responses of the schools.

Thirty or so other local governments have similar systems. But the number of such organizations, as well as those of nonprofit groups and counseling services by bar associations dedicated to these issues, should be increased significantly.

Educators and others responsible for school education should reflect deeply on the grim implications of the suicides of two junior high school girls, learn and share lessons from the tragedies and take necessary steps to better respond to similar cases.

Effective actions to prevent a recurrence are urgently needed.