Train services to resume on tracks swept away by 2011 tsunami 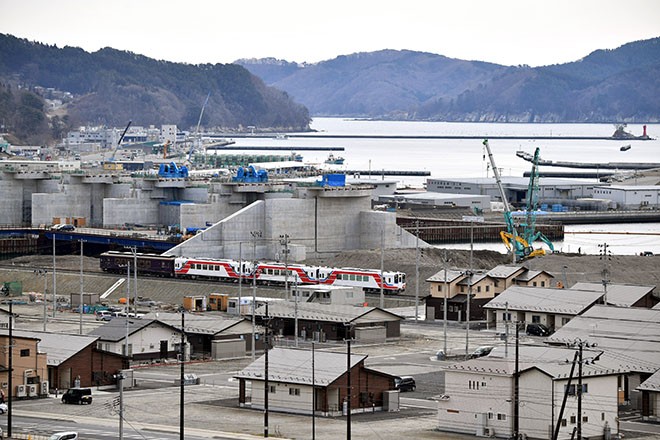 A Sanriku Railway train heads for Kamaishi Station on March 23 to take part in a ceremony to mark the start of the Rias Line. (Yosuke Fukudome)

MIYAKO, Iwate Prefecture--Train services are set to resume along a long stretch of track swept away in the 2011 tsunami disaster that devastated northeastern Japan.

A special ceremony was held March 23 at Kamaishi Station to mark the start of the new Rias Line operated by Sanriku Railway Co., based here.

The company had already resumed operations at what was then called the North and South Rias lines in April 2014.

But what was once the Yamada Line operated by East Japan Railway Co. (JR East) between Miyako and Kamaishi was knocked out by the tsunami, with about 8.5 kilometers of tracks completely swept away. Seven of the 13 stations along that line were damaged.

With a declining population in the region, JR East abandoned plans to resume operations on the Yamada Line, despite calls to do so by local municipalities. Instead, the company agreed to foot most of the reconstruction costs while turning over business operations to Sanriku Railway.

The new Rias Line will cover 163 kilometers from Kuji Station in the north to Sakari Station to the south. It is the longest railway line operated through a public-private partnership.

The March 23 run was a commemorative one with passengers selected through lottery. Regular operations will begin March 24.

Among those waiting for the arrival of the commemorative train at Miyako Station was Iwao Yuzawa, 79, who said, "The town has been prettied up and the railway has been reborn. I can really feel progress is being made in reconstruction."

There will be three southbound runs a day covering the entire 163 kilometers and two northbound runs daily over the same distance. Eleven round-trip runs will be made between Miyako and Kamaishi each day.

JR East contributed about 20 billion yen ($181 million) to rebuild the tracks and provide new train cars as part of efforts to gain agreement from local municipalities to take over control of the Rias Line.