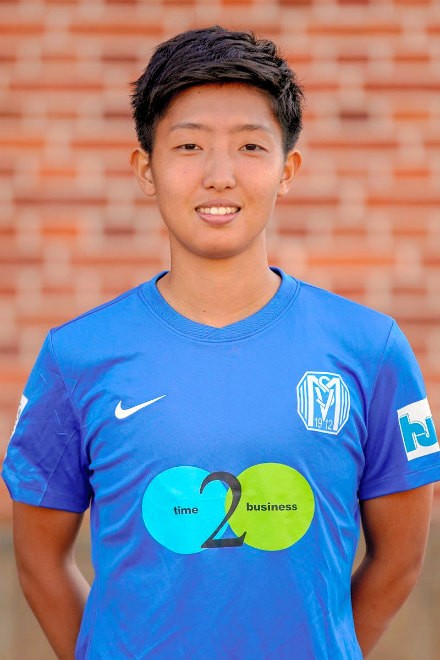 Shiho Shimoyamada, a player for SV Meppen, a women’s soccer team in the second tier of the German Bundesliga (Provided by SV Meppen)

A women's soccer player has come out publicly as a sexual minority, hoping that her declaration will encourage other athletes to do the same.

Shiho Shimoyamada, 24, who plays for SV Meppen, a team in the second tier of the German Bundesliga, hopes to normalize the LGBT presence in Japan’s sports community before the 2020 Tokyo Olympics.

“You will find a lot of company, absolutely,” said Shimoyamada of others like her, if they come out.

She added in her message to athletes who keep their sexual orientation hidden, “Once you share your feelings with the company you keep, sports will become even more fun.”

The organizers for the 2020 Tokyo Olympics and Paralympics have promoted diversity and encouraged more lesbian, gay, bisexual, and transgender people to participate in sports.

But Shimoyamada has noticed what is critically missing in the effort.

“You don’t see the face of a LGBT person,” she said.

That prompted her to think, “It will be powerful if an actual LGBT athlete sends a message.”

With backing from Pride House Tokyo, a project to host LGBT-related events and offer information about sexual minorities, Shimoyamada recorded a video message in Tokyo in January, pouring out her story and thoughts.

Her first relationship with a woman was in high school. After entering Keio University, she learned that, in women’s soccer circles, there are many players romantically interested in women.

That gave Shimoyamada an affirmation of her sexual identity.

Still, she kept her sexuality a secret from her team.

Her close friends, however, accepted her for who she was.

“They helped me to realize that I don’t have to change, and it’s OK to stay with the team and love the person I love. I felt relieved,” Shimoyamada recalled.

Her SV Meppen teammates are very understanding of sexual minorities, as they often ask her, “Which one are you attracted to, men or women?”

“They don’t perceive a LGBT player as special. I can play just as a soccer player here, and I feel comfortable in such a relationship,” Shimoyamada said.

The International Olympics Committee amended the Olympic Charter in 2014 to ensure that sexual orientation is explicitly listed in the non-discrimination clause.

Overseas, an increasing number of sports associations have set up written rules and guidelines regarding the participation of athletes of sexual minorities in competition.

Japan, on the other hand, lags far behind, as not a single sports association has taken such a step.

Pride House was launched by local LGBT communities when Vancouver hosted the 2010 Winter Olympics, opening a facility for interactions during the Games. The participation continued in the Olympics in London, Rio de Janeiro and Pyeongchang.

After Tokyo won the bid to host the 2020 Games, Pride House Tokyo was launched by about 20 nonprofit organizations and citizen groups that were sponsored by companies.

Patrons include celebrated athletes, such as Yuki Nagasato, a women’s soccer player and member of the national team that won the FIFA World Cup in 2011, and Yuko Arimori, a marathoner and two-time Olympic medalist.

It plans to open a facility for exchanges during the Tokyo Games. It will also host a sporting event in May in Tokyo and invite the participation of sexual minorities.

According to the consortium of Pride House Tokyo, 56 athletes who openly identified as LGBT participated in the 2016 Rio de Janeiro Olympics.

“Everybody idolizes athletes," said Gon Matsunaka, 42, president of the nonprofit organization Good Aging Yells, which operates the consortium of Pride House Tokyo. "They are very influential.”

The video message that Shimoyamada recorded will be published on the project’s website in April.