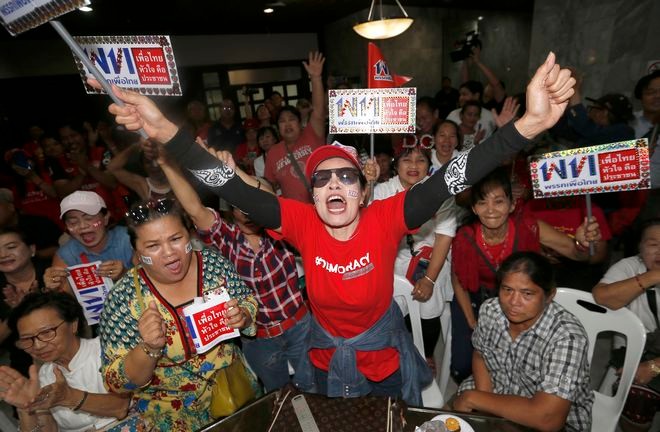 BANGKOK--Two major political parties raised doubts on Monday about the results of Thailand's general election after a party linked to the military took a surprise lead in the popular vote that suggested the country's junta chief will remain in power.

It was still not certain that the military's proxy party would secure enough seats in the lower house of parliament for Prayuth Chan-ocha to stay on as prime minister.

Unofficial results of Thailand's first election since a 2014 coup will be announced at 2 p.m. local time on Monday.

With around 94 percent of overall votes counted it was clear that Pheu Thai, a party linked to the self-exiled former premier Thaksin Shinawatra whose loyalists have won every election since 2001, had fallen far short of expectations. However, it still looked likely to have the largest share of parliament seats.

The strong showing by the pro-junta Palang Pracharat stunned voters who had hoped the poll would loosen the grip that traditional elites and the military hold on power in a country that has one of the highest measures of inequality in the world.

Many took to social media to voice their suspicions about the results of an election that critics had said was systematically skewed in favor of the military from the outset.

Thai-language hashtags that translated as "Election Commission screw-up" and "cheating the election" were trending at numbers one and three on Twitter in Thailand.

Many tweets referred to inconsistencies between the numbers for voter turnout and ballots cast in some parliamentary constituencies. Some questioned the overall turnout of less than 70 percent, which was much lower than expected.

She said the party's legal team was considering whether to submit complaints to the Election Commission.

Future Forward, a new party that appears to have made a spectacular election debut thanks to its appeal to young voters, also questioned the poll numbers.

"There are obviously some irregularities with the numbers because they don't add up. This is making people skeptical of the election results," said party spokeswoman Pannika Wanich.

"The Election Commission should address this issue because if the people feel they cannot trust the results, there will be more problems to come," she said.

A spokesman for Palang Pracharat declined to comment immediately on the concerns of his party's rivals.

Jarungwit Pumma, secretary-general of the Election Commission, declined to comment and said questions about the results would be addressed at a news conference later on Monday.

The commission had planned to announce the unofficial results for the 500-seat lower House of Representatives on Sunday evening but said, without giving a reason, its announcement had been delayed until Monday.

With 94 percent of overall votes counted, the commission reported that the pro-junta Palang Pracharat was leading with 7.69 million votes. The Thaksin-linked Pheu Thai Party trailed with 7.23 million votes.

The popular vote numbers did not reflect parliamentary constituency seats won. Pheu Thai could still take the lion's share of these, which are decided on a first-past-the-post basis, because of its popularity in the north and northeast of the country.

Based on a Reuters tally of partial results of the 350 constituency seats contested on Sunday, Pheu Thai was on track to win at least 129 and Palang Pracharat at least 102.

Another 150 "party list" seats in the lower house will be allocated under a complex proportional representation formula.

However, Prayuth looked in a good position to remain in office thanks to a new, junta-devised electoral system.

The lower house and the upper house Senate, whose 250 members are appointed by the junta, will together select the next prime minister.

That means Prayuth's party and allies have to win only 126 seats in the lower house, while Pheu Thai and its potential "democratic front" partners would need 376.

Thailand has been racked for the past 15 years by street protests by both Thaksin opponents and his supporters. The populist former telecoms billionaire was thrown out by the army in 2006 and a government led by his sister was ousted in 2014.