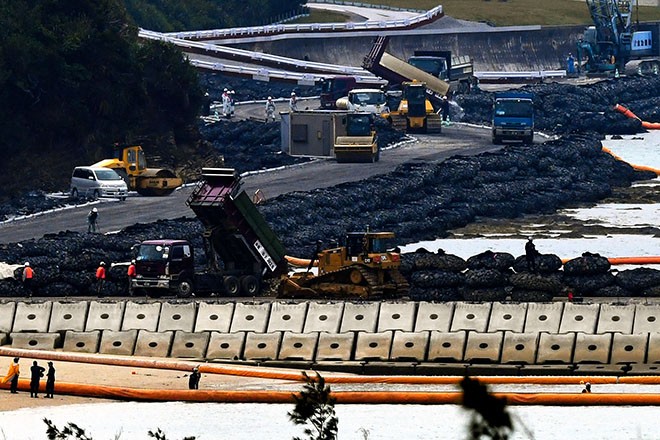 Work to pour dirt and sand in a new section of the reclamation site began around 3 p.m. on May 25 off the Henoko district of Nago, Okinawa Prefecture. (Motoki Nagasawa)

The Defense Ministry’s Okinawa Defense Bureau notified the prefectural government early in the day of the work to start in a 33-hectare area off this city’s Henoko district.

Cranes at the U.S. Marine Corps Camp Schwab, which sits next to the reclamation site, were busy hoisting construction materials from early morning. Work to pour dirt and sand into the new section got under way in the afternoon.

The reclamation work represents a direct snub to Okinawa Governor Denny Tamaki, who met with Prime Minister Shinzo Abe on March 19 to request a suspension in the project that has inflamed Okinawans.

It also follows a Feb. 24 referendum in which 72 percent of voters in the southernmost prefecture expressed opposition to a continuation of the base project.

The facility to provide partially offshore runways is intended as a replacement for the U.S. Marine Corps Air Station Futenma in Ginowan, also in the prefecture.

Okinawans had demanded the closure of Futenma due to its proximity to a crowded residential area, and sought relocation outside of Okinawa, home to about 70 percent of all U.S. military facilities in Japan.

Kiichiro Jahana, vice governor of Okinawa Prefecture, reacted to the start of a new phase in reclamation work by calling for dialogue between the central and prefectural governments over the base issue.

“The results of the referendum showed that islanders do not support the base project,” he said March 25. “To suspend the project and engage in dialogue is what a democratic nation should do.”

But Defense Minister Takeshi Iwaya reiterated the central government’s position to continue with the project on grounds it is the only viable option.

“The central government aims to ease Okinawa’s burden of hosting U.S. military bases by achieving the relocation of the Futenma base to Henoko and returning all of the land taken by Futenma to Okinawa Prefecture,” Iwaya told a session of the Upper House Budget Committee the same day.

The new segment is located southwest inside of the entire 160-hectare reclamation site and is adjacent to a 6.3-hectare portion where landfill work has been under way since December. Nearly 40 percent of the landfill has been finished in that section.

The central government plans to complete all reclamation work in the southern side by summer next year.

But landfill work in the northern side is expected to pose a formidable challenge as the Okinawa Defense Bureau has acknowledged that much of the seabed is too unstable and will need reinforcement work.