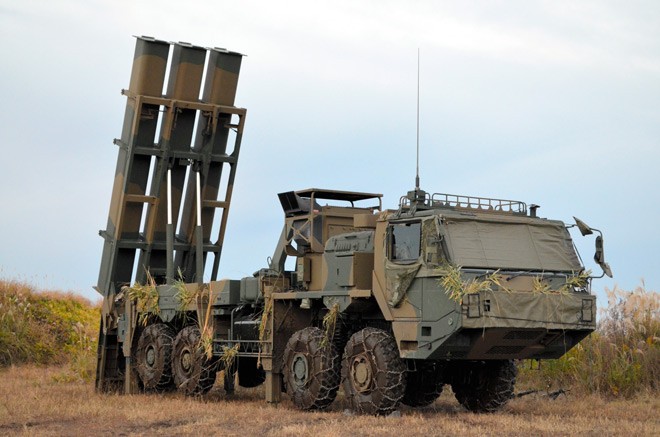 A Type 12 surface-to-ship missile unit is prepared to fire a missile during a drill in the Oyanohara training area in Yamato, Kumamoto Prefecture. (Asahi Shimbun file photo)

Missile batteries equipped with surface-to-ship missiles (SSM) and surface-to-air missiles (SAM), and guard units were deployed on Amami-Oshima and Miyakojima, located 200 kilometers southeast of the Senkaku Islands in the East China Sea. The Senkakus are administered by Japan but also claimed by China, which calls them “the Diaoyu islands.”

The Defense Ministry beefed up its readiness in Japan’s southwestern regions to thwart Beijing from taking provocative actions in the East China Sea and discourage its naval vessels and aircraft from passing through nearby straits and airspace.

In times of emergency, the guard units will be tasked with carrying out initial responses, in addition to their role to protect airports, ports and harbors so they can receive support troops from outside the islands, according to the GSDF.

A total of about 560 troops were deployed on Amami-Oshima: about 350 troops at a camp in the city of Amami and about 210 troops at a sub-camp in the town of Setouchi on the island.

The initial deployment of approximately 380 guard troops on Miyakojima is expected to be expanded to 700 to 800 troops in the next fiscal year.

The troop deployments and the current construction of a camp on Ishigakijima island in Okinawa Prefecture are part of measures to strengthen Japan’s defensive presence in the Nansei island chain.

The island chain, stretching about 1,200 km from the Osumi islands in Kagoshima Prefecture to Yonagunijima island in Okinawa Prefecture, lies between the main island of Kyushu and Taiwan.

The ministry incorporated its policy designed to bolster defense preparedness on the Nansei island chain into the Mid-Term Defense Program for fiscal 2014 to fiscal 2018.

The GSDF camp is located in the central part of Miyakojima island. Firing ranges and ammunition depots will be installed in the eastern part of the island.