EDITORIAL: Japan behind the times on issue of surnames for married couples 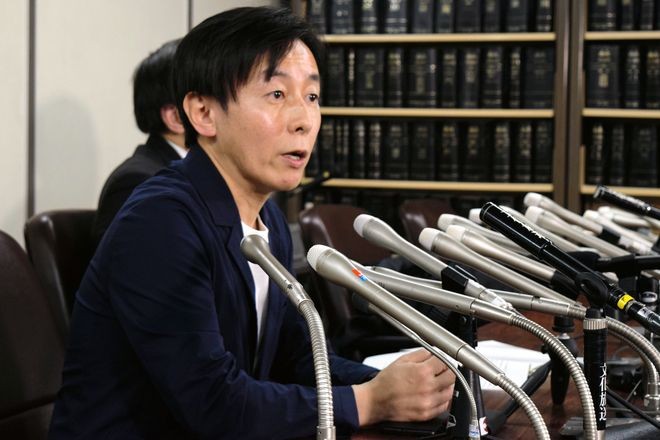 Yoshihisa Aono, president of software company Cybozu, Inc., holds a news conference in Tokyo’s Kasumigaseki district after the Tokyo District Court on March 25 rejected a lawsuit filed by him and three other plaintiffs. (Ryota Kyuki)

The Tokyo District Court on March 25 perfunctorily dismissed a lawsuit, filed last year by four plaintiffs who claimed the nation's Family Register Law violates constitutional guarantees of "respect for the individual" and "equality of all under the law" by requiring married Japanese couples to choose just one surname for both partners.

The court went on to conclude that even if inconveniences and damages arise from having to change one's surname upon getting married, these problems should be handled by the Diet, not the courts.

The argument presented by the court revolved entirely around legal theories, and did not show the slightest consideration for the thoughts and feelings of individuals forced to change their surnames.

Given that a Japanese citizen marrying a non-Japanese can choose to either keep his/her birth surname or assume the surname of his/her spouse, there is really no reason why the same cannot be the case for a union between two Japanese citizens.

The court reiterated that each individual's surname under the Civil Code must match the name on the family register, noting that "only one legal surname is planned for use in society by each individual."

In recent years, more people have opted to use their pre-marriage names at work, a development that even court judges have recognized in handing down verdicts.

We see no point whatsoever in the Tokyo court's latest insistence on "only one surname under the law."

In the 2015 Supreme Court ruling, five of the 15 justices deemed the Civil Code provision (on one name only per married couple) to be unconstitutional.

Yoshihisa Aono, president of software company Cybozu, Inc., is one of the four plaintiffs in the latest case. A stream of lawsuits have been filed by people unable to endure the anguish of being forced to become someone they aren't.

In this respect, Japan is an utter aberration in the international community. Small wonder that more Japanese people have come to this realization and have decided not to suffer in silence.

However, there are no signs of the Abe administration taking interest in this issue. A bill to enable couples to make their own decision about their surname, proposed to the Diet by opposition parties, remains shelved.

The ruling coalition is instead pushing the idea of expanding the use of pre-marriage names. We have no objection to the expansion per se. But as we have repeatedly argued in previous editorials, it will never present any fundamental solution to the problem.

Society is definitely changing. In a Cabinet Office poll in 2012, the public was about evenly split on whether to enable couples to make their own decision about their surname. But in the same survey of 2017, 42.5 percent of respondents were in favor of couples making their own decision, and only 29.3 percent were against.

And this month, the Mie Prefectural Assembly adopted a document calling for the institutionalization of a system that would enable couples to decide what to do about their surname upon marriage. Similar moves are being made by other prefectural and municipal assemblies.

Obviously, there are people who do not want to stifle their individuality as members of society, and more citizens are becoming aware of the need to respect diversity. And yet, the nation's political leaders remain unresponsive.

Are we Japanese citizens going to keep putting up with these outdated social restrictions? The upcoming unified local elections and this summer's Upper House election will at least serve as good opportunities for voters to express their thoughts.