Okinawa panel to study alternative plans for Henoko base relocation 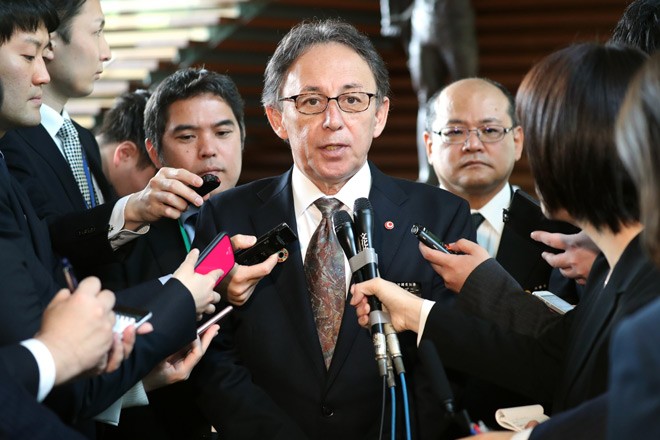 Okinawa Governor Denny Tamaki responds to questions from reporters on March 19 after a meeting in Tokyo with Prime Minister Shinzo Abe. (Takeshi Iwashita)

NAHA--Eager to resume talks with Tokyo, Okinawa Governor Denny Tamaki will set up a panel to study alternative plans for relocating the U.S. Marine Corps Air Station Futenma from Ginowan in the prefecture.

The central government is already pushing ahead with land reclamation work at the current site, an offshore area in Nago’s Henoko district in Okinawa Prefecture.

Soil and dirt were dumped into a new section off Henoko on March 25 despite a February prefectural referendum that showed more than 70 percent of voters are against the relocation plan.

Tamaki’s predecessor said it was up to the central government to think up an alternative for the Henoko plan. But with the Abe administration showing no signs of even sitting down to discuss other options, Tamaki apparently decided that the prefectural government had to present its own proposal to promote dialogue.

“We want to bring together a unified view in order to negotiate with the central government,” a high-ranking Okinawa prefectural government official said.

The panel will be established after the new fiscal year begins in April.

Sources said some of those approached by the Okinawa government have already agreed to join the panel.

The prefectural government has consulted with Mike Mochizuki, an associate professor of political science and international relations at George Washington University, about the base relocation issue.

Former government officials who will likely be approached include Kyoji Yanagisawa, a former Defense Ministry official who served as assistant chief Cabinet secretary, and Ukeru Magosaki, a career diplomat who once headed the Foreign Ministry’s Intelligence and Analysis Bureau.

The advisory panel will be tasked with considering various issues related to Okinawa politics, but the U.S. military base issue, how U.S. Marines in the prefecture should be deployed, and possible alternatives for Henoko relocation are expected to be the key topics, a prefectural government official said.

Tamaki has said, even before becoming governor in October, that he wanted the Futenma base to be moved outside of Okinawa.