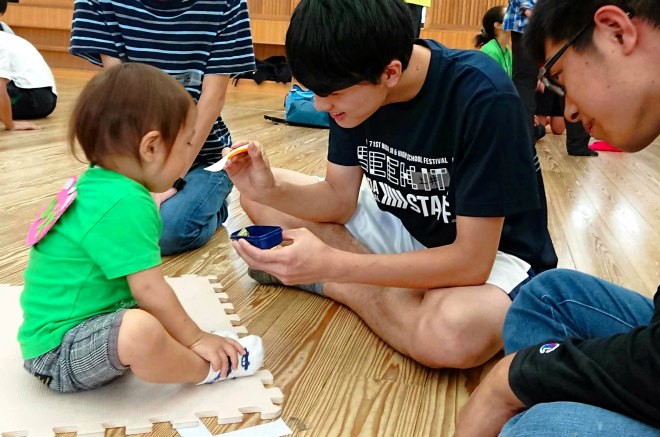 A third-year student at Nada Senior High School feeds a baby during the “baby class” in Kobe’s Higashi-Nada Ward in October. (Provided by Mamahata, a nonprofit organization of a supporting team for working mothers)

Boys being groomed as leaders in business and politics found themselves cradling babies during a lesson on abolishing narrow-minded and sexist views and improving the lives of future families.

“(Babies) are a soothing existence, but it is tough taking care of them all by yourself,” said Asahi Katadason, who taught the special class for 29 third-year high school students at Nada Junior and Senior High School in Kobe’s Higashi-Nada Ward.

Nada and other elite all-male junior high and high schools in Japan are teaching students about raising children and building equal relationships with their future wives.

Officials at the schools say the times have changed, and they don’t want their students to think that a husband’s only purpose in a family is to make money while his wife’s work is in the home.

Seven babies were brought in for the once-a-year baby classes at the Nada school in October. The students played with the babies or held them in their arms.

“We hope that learning such things at an early age will enable our students to consider taking paternity leave in the future or at least to understand how hard their wives’ jobs are even if their partners are mainly in charge of child-rearing,” said Katadason, who taught the class with his colleague, Takuya Ikeda, both of whom are 42 years old.

One of the visiting babies belonged to a teacher at the school. The presence of the infant allowed the students to recognize that their teacher is also a parent.

At the following class, two teachers were accompanied by their wives. The infant of one of the couples had appeared in the previous baby class.

The teachers discussed their child-rearing responsibilities while their wives spoke about their careers.

The classes are conducted in collaboration with Mamahata, a nonprofit organization that supports working mothers in the city’s Nagata Ward.

A high percentage of the school’s students have mothers who are full-time homemakers, and most of their teachers are men.

Therefore, most of the students have few opportunities to see women working full time, according to Katadason.

“We designed the class to show working women as role models by allowing the students to see and meet the wives of teachers, who are close to the students,” he said.

Magohiro Wada, 66, principal of the school, welcomes the baby classes.

“We are in a period with an increasing number of double-career households, and you can no longer think that you do not need to take care of your children because you are a man,” Wada said. “Such (educational) experiences are needed for men who will live in the incoming era.”

In January, after tasting three types of food for different ages, the students wrote such comments as, “It has almost no taste” and “It feels strange.”

Reiko Tamura, 50, the teacher in charge of the curriculum, said, “If they have experience or knowledge on child-rearing, they will be able to become fathers who are proactively involved in parenting.”

Some questions on recent entrance examinations reflect the schools’ policies to teach a wide variety of values to the students.

The admissions test of Seiko Gakuin junior high school in Yokohama conducted in February included questions about the law enacted in May 2018 to promote parity between male and female candidates for Diet and local assembly elections.

Applicants were also questioned about Article 24 of the Constitution, which states, “Marriage shall be based only on the mutual consent of both sexes,” and the Equal Employment Opportunity Law, which aims to eliminate discrimination against women in the workplace.

The appearance of such questions was based on the idea of preventing students from only seeing things from a male perspective.

“You need to be able to play the role of a husband or father at home at a world-class level to live as an international person,” Seiichi Kudo, 63, principal of the school, often tells students.

He said the era of men working outside while women stay indoors for housework ended a long time ago.

“We wish to nurture personnel resources with the strength to share household duties and flexibly change their way of working according to the family situation, such as children or old parents who need care, based on the concept of an equal partnership between a husband and wife,” Kudo said.

In the Japanese reading section of the junior high school entrance exam for the Kaisei Academy, questions were based on a story about a career-oriented wife and her husband who is a full-time homemaker engaged in child-rearing or household duties.

Graduates of the senior high school at Kaisei in Tokyo’s Arakawa Ward consistently account for the highest ratio of all matriculates for the prestigious University of Tokyo.

Toshimasa Ota, 45, a journalist who covers education issues, said, “At male-only schools, students have had few opportunities to learn that they should divvy up child-rearing or household duties or to think that they should not be bound by the thought that ‘men should continue to earn money.’”

He said such schools are required to nurture students so that they can live with their partners with mutual respect.

(This article was written by Tomoko Yamashita and Azusa Mishima)