Team develops iPS cells with less chance of being rejected 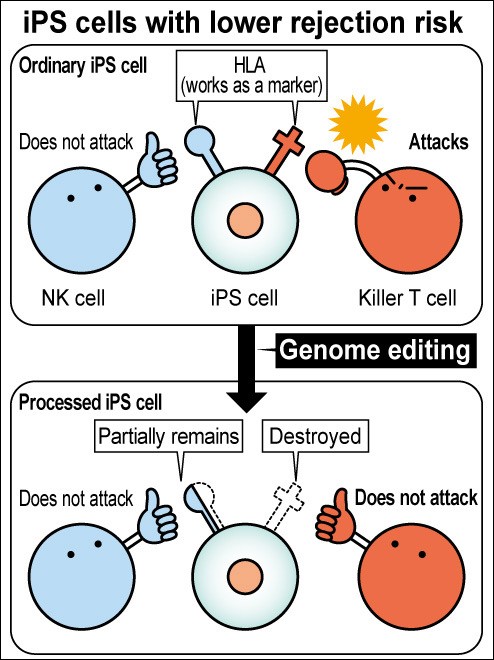 Researchers developed a way to produce induced pluripotent stem (iPS) cells with a lower risk of rejection, overcoming a major obstacle to the clinical application of regenerative medicine.

The findings were published in the U.S. scientific journal Cell Stem Cell on March 8.

Although using donor blood of third-party individuals results in cheaper and faster iPS cell production, the procedure poses a higher risk of immune rejection after transplantation.

As such, it remains a major challenge to overcome for the practical application of regenerative medicine based on iPS cells.

The researchers said the new technique could enable iPS cells matching a larger number of patients to be produced more easily.

The team then turned the treated cells into blood cells to be tested in vitro or in mice, and discovered that the iPS-derived cells could evade attack by killer T and NK cells, resulting in a lower possibility of rejection.

The CiRA is now working to develop and store iPS cells from blood samples provided by individuals with HLA types that are less likely to cause rejection. While 140 HLA types are needed to provide safe iPS cells for 90 percent of Japanese, it remains unclear when this goal can be achieved.

The team said the newly developed method will allow only seven HLA types to cover 95 percent of Japanese. It also estimates that 12 HLA types will be sufficient to treat a majority of people of different races.

(This article was written by Roku Goda and Ryosuke Nonaka.)