KEPCO to ship MOX nuclear fuel assemblies from France in 2020 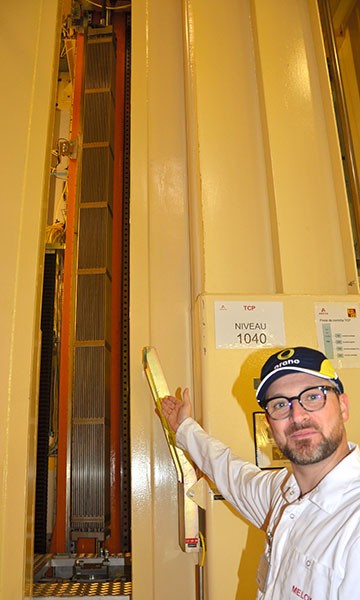 A worker shows mixed oxide (MOX) fuel assemblies, which are the same type as those to be transported to Japan, in Marcoule, France, on March 14. (Yusuke Ogawa)

KEPCO plans to use the MOX fuel in the No. 3 and the No. 4 reactors of its Takahama nuclear power plant in Fukui Prefecture, which would reduce its plutonium overseas by about one ton from the current 11 tons.

KEPCO, based in Osaka, had asked French nuclear fuel company Orano (formerly Areva) to reprocess the spent nuclear fuel and extract plutonium from it.

The plans were revealed to The Asahi Shimbun by an Orano executive.

In July 2018, the Japanese government announced a goal of decreasing the total volume of plutonium, which is stockpiled in Japan and overseas by Japanese companies, from the current 47 tons.

Japanese companies must reduce their plutonium stockpiles before a reprocessing facility in Rokkasho, Aomori Prefecture, starts operations in 2021 to extract plutonium.

In 2017, Orano concluded a contract with KEPCO to produce 32 MOX fuel assemblies.

Under the contract, Orano has extracted plutonium from spent nuclear fuel, which was transported from Japan, in its reprocessing plant in La Hague in northern France.

The French company plans to transport the plutonium to its facility in Marcoule, southern France, within 2019 to start production of MOX fuel.

Then, the MOX fuel will be transported from a port in Cherbourg, northern France, to the Takahama nuclear power plant in Japan on a sea route in 2020 at the earliest.

However, MOX fuel must be used at 16 to 18 reactors to steadily decrease the plutonium stockpile of Japanese companies overseas and up to seven tons of plutonium to be extracted at the Rokkasho facility a year.

If Japan's stockpile of plutonium, which can be used as a raw material for nuclear weapons, increases, the country could be criticized by the international society.

Since 2018, the Japanese government has asked electric power companies to offer their plutonium to each other to decrease their stockpiles, particularly those overseas.

In the future, the three electric power companies of Kansai, Kyushu and Shikoku that are using MOX fuel could obtain plutonium from Tokyo Electric Power Co. and Chubu Electric Power Co., both of which can’t reduce their stockpiles as their reactors are idled.

“In order to decrease stockpiles, it is most efficient to burn MOX fuel at Japanese nuclear power plants,” said Orano CEO Philippe Knoche.