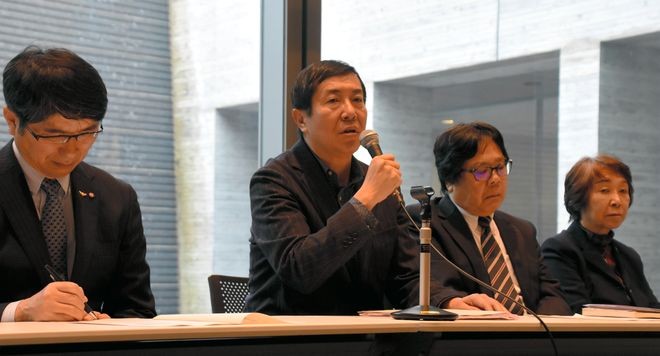 “I want the film to move people’s hearts,” director Katsuya Matsumura said at a news conference in Nagasaki on Nov. 25. (Toko Tanaka)

NAGASAKI--Production has started for a film based on “The Head of Mary,” a play by Nagasaki native Chikao Tanaka (1905-1995) about the Urakami Cathedral, which was destroyed by the atomic bomb in 1945.

Director Katsuya Matsumura, 56, and others announced the project at a news conference held at the Nagasaki National Peace Memorial Hall for the Atomic Bomb Victims in the city’s Hiranomachi district on Nov. 25.

The film, titled “Inori--Maboroshi ni Nagasaki o Omou Toki” (Prayer--When you think of Nagasaki in a vision), is set in Nagasaki in the decade starting in 1955. Citizens are split over whether to preserve the ruins of the cathedral.

“It’s a story about uncelebrated women living in obscurity in the corners of society,” Matsumura said at the news conference. “I want to portray the ‘scars’ of the war and Nagasaki through this film.”

The story centers around two characters: Shika, a Catholic woman who works as a nurse by day and a prostitute by night; and Shinobu, who lost her family and home in the atomic bombing and swears revenge on a man she hates.

They learn about a movement to demolish the ruins of Urakami Cathedral, so they plot to steal the pieces of a statue of Mary from the wreckage for preservation.

Actress Reiko Takashima is cast as Shika, while Tomoka Kurotani will play Shinobu. Seiichi Tanabe will portray Shinobu’s husband, with Akira Emoto set to play a surgeon and authority on atomic bomb diseases.

Nagasaki Mayor Tomihisa Taue, who also attended the news conference, said: “I’d like to welcome the project to generate interest in the film when the number of hibakusha atomic bomb survivors who can tell their stories is decreasing.

“I hope that it will be a great piece of work that will be remembered.”

Some scenes will be shot in the city, as well as in several locations in the prefecture, including the Kannai Ichiba market, the interior of a streetcar in the city and the ruins of a torpedo launch test site in Kawatana.

It will be featured at the review conference of the Nuclear Nonproliferation Treaty (NPT) that takes place at U.N. headquarters in New York in spring.

The movie will be shown in Nagasaki and elsewhere in July before its nationwide release in September, the director said.