A long Western-style rapier owned by a feudal lord Kato Yoshiaki turns out to have been forged in Japan. (Video by Jiro Tsutsui) 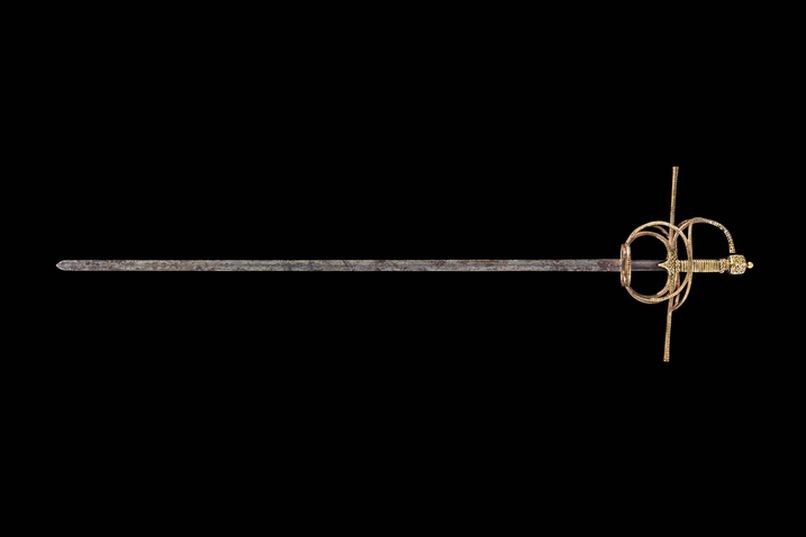 The Minakuchi Rapier, owned by Fujisakajinja shrine (Provided by the Minakuchi history and folk museum)

KOKA, Shiga Prefecture--A European-style rapier owned by a feudal-era warlord was actually forged in Japan, but who commissioned the production and what was used as the model remain unclear, according to a study.

Researchers from the Tokyo National Research Institute for Cultural Properties and the Koka city education board examined the rapier and found that Japanese sword-producing techniques were used in the manufacturing process.

The rapier dates from the first half of the 17th century in the early Edo Period (1603-1867) and was found in the Minakuchi district here.

Called the Minakuchi Rapier, the weapon is said to have been the property of Kato Yoshiaki (1563-1631), a warlord who served Toyotomi Hideyoshi (1537-1598) and was one of the seven commanders who distinguished themselves in the 1583 Battle of Shizugatake.

The warlord also showed a strong interest in European culture.

Measuring 104.5 centimeters long with a 1.5-cm-wide blade, the rapier is similar in shape to a fencing foil.

Rapiers were commonly used to stick enemies in Europe during the 16th and 17th centuries.

Yoshiaki’s rapier, whose hilt is decorated with complex ornaments, is believed to be the only Western-style sword in Japan dating from the period.

The Kato family later became the lord of the Minakuchi domain and commissioned what is currently known as Fujisakajinja shrine in 1829 to commemorate Yoshiaki. The rapier has been enshrined there.

Koji Kobayashi, head of the Trans-Disciplinary Research Section of the Tokyo National Research Institute for Cultural Properties, and other team members started their survey on the rapier in 2013.

They discovered that the joint between the hilt and the blade of the rapier was different from those made in Europe.

A CT scan of the joint’s cross-section showed a screw-like structure, a design that allowed the handle to be fixed with the blade by rotating the pommel.

Western swords were generally connected to their grips by having the blade inserted through the handle and flattening the end that stuck out from the hilt.

Japanese matchlock gun makers of the time had the skills to create screws, and their techniques are believed to have been used to reproduce the Western sword.

The researchers also found evidence that the blade was forged using techniques unique to Japan.

A detailed analysis of the weapon’s blade at the SPring-8 large synchrotron radiation facility in Sayo, Hyogo Prefecture, showed a layered structure like a millefeuille. That means the rapier was created by repeatedly bending and hammering the heated iron to remove impurities to make the finished blade even.

That process resulted in the many layers of metal seen in Japanese swords, the researchers said.

“A swordsmith, metal ornament maker and others apparently worked together to complete the rapier based on a Western-style sword imported to Japan,” Kobayashi said.

It remains unknown who commissioned the production of the rapier and which Western sword served as the model, but there have been some clues.

Kobayashi said he found a similar rapier at a museum in the Philippines that was recovered from a Spanish ship that sank off Manila in 1600.

A portrait of the governor-general of the Dutch East India Company kept at a museum in the Netherlands also depicts a rapier with a similar design.

Records also say that a child of the warlord wore an armored suit remodeled from a European one.

“Spain and the Netherlands traded a wide variety of goods with Japan around that time,” Kobayashi said. “Interested in European culture, Yoshiaki may have bought the sword from someone.”

It was difficult to use thin rapier-like swords in actual battles in Japan, so the Western blade was likely used to enhance the authority of the owner.

The rapier will be on display at the Minakuchi history and folk museum through Jan. 29.

Admission is 150 yen ($1.37) for adults and 80 yen for elementary and junior high school students. The museum is closed on Thursdays and Fridays.