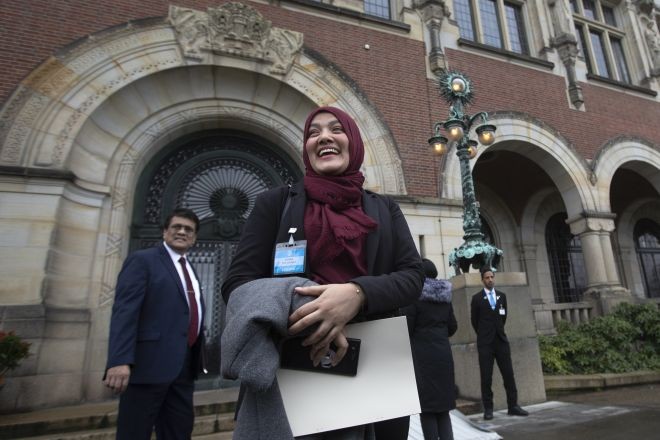 Yasmin Ullah, a member of the Rohingya community, is all smiles as she walks out of the International Court in The Hague on Jan. 23 after the court ordered Myanmar to take all measures in its power to prevent genocide against the Rohingya. (AP Photo)

THE HAGUE--The United Nations’ top court on Thursday ordered Myanmar to do all it can to prevent genocide against the Rohingya people, a ruling met by members of the Muslim minority with gratitude and relief but also some skepticism that the country’s rulers will fully comply.

The ruling by the International Court of Justice came despite appeals last month by Myanmar’s civilian leader Aung San Suu Kyi for the judges to drop the case amid her denials of genocide by the armed forces that once held the former pro-democracy champion under house arrest for 15 years.

Judge Abdulqawi Ahmed Yusuf, president of the court, said in his order that the Rohingya in Myanmar “remain extremely vulnerable.”

In a unanimous decision, the 17-judge panel added that its order for so-called provisional measures intended to protect the Rohingya is binding “and creates international legal obligations” on Myanmar.

U.N. Secretary-General Antonio Guterres welcomes the court’s order and “will promptly transmit the notice of the provisional measures” it ordered to the U.N. Security Council, U.N. spokesman Stephane Dujarric said.

Diplomats said the U.N.’s most powerful body is not expected to take any action until it sees how Myanmar is implementing the court’s order.

While the court has no ability to enforce the orders, one international law expert said the ruling will strengthen other nations pressing for change in Myanmar.

“Thus far, it’s been states trying to put pressure on Myanmar or using their good offices or ... diplomatic pressure,” said Priya Pillai, head of the Asia Justice Coalition Secretariat. “Now, essentially for any state, there is legal leverage.”

The orders specifically refer to Rohingya still in Myanmar and thus did not look likely to have an immediate impact on more than 700,000 of them who have fled to neighboring Bangladesh in recent years to escape Myanmar’s brutal crackdown.

Even so, Yasmin Ullah, a Rohingya activist who lives in Vancouver and was in court for the decision, called it a historic ruling.

“Today, having the judges unanimously agree to the protection of Rohingya means so much to us because we’re now allowed to exist and it’s legally binding,” she told reporters on the steps of the court.

But asked if she believes Myanmar will comply, she replied: “I don’t think so.”

Myanmar’s legal team left the court without commenting. Later, its foreign ministry said in a statement that it took note of the ruling, but repeated its assertion that there has been no genocide against the Rohingya.

The court sought to safeguard evidence that could be used in future prosecutions, ordering Myanmar to “take effective measures to prevent the destruction and ensure the preservation of evidence related” to allegations of genocidal acts.

At the end of an hour-long session in the court’s wood-paneled Great Hall of Justice, judges also ordered Myanmar to report to them in four months on what measures the country has taken to comply with the order and then to report every six months as the case moves slowly through the world court.

“I think this is the court maybe being much more proactive and ... careful in acknowledging that this is a serious situation and there needs to be much more follow-up and monitoring by the court itself, which is which is quite unusual as well,” Pillai said.

Rohingya refugees living in camps in Bangladesh welcomed the order, which was even supported by a temporary judge appointed by Myanmar to be part of the panel.

“This is good news. We thank the court as it has reflected our hope for justice. The verdict proves that Myanmar has become a nation of torturers,” 39-year-old Abdul Jalil told The Associated Press by phone from Kutupalong camp in Cox’s Bazar.

However, he too expressed doubts that Myanmar would fully comply.

“Myanmar has become a notorious state. We do not have confidence in it,” Jalil said. “There is little chance that Myanmar will listen.”

“The ICJ order to Myanmar to take concrete steps to prevent the genocide of the Rohingya is a landmark step to stop further atrocities against one of the world’s most persecuted people,” said Param-Preet Singh, associate international justice director of New York-based Human Rights Watch. “Concerned governments and U.N. bodies should now weigh in to ensure that the order is enforced as the genocide case moves forward.”

The world court order for what it calls provisional measures came in a case brought by the African nation of Gambia on behalf of an organization of Muslim nations that accuses Myanmar of genocide in its crackdown on the Rohingya.

The judges did not decide on the substance of the case, which will be debated in legal arguments likely to last years before a final ruling is issued. But their order to protect the Rohingya made clear they fear for ongoing attacks.

At public hearings last month, lawyers used maps, satellite images and graphic photos to detail what they called a campaign of murder, rape and destruction amounting to genocide perpetrated by Myanmar’s military.

The hearings drew intense scrutiny as Suu Kyi defended the campaign by her country’s military forces. Suu Kyi, who as Myanmar’s state counselor heads the government, was awarded the 1991 Nobel Peace Prize for championing democracy and human rights under Myanmar’s then-ruling junta.

Buddhist-majority Myanmar has long considered the Rohingya to be “Bengalis” from Bangladesh even though their families have lived in the country for generations. Nearly all have been denied citizenship since 1982, effectively rendering them stateless. They are also denied freedom of movement and other basic rights.

In August 2017, Myanmar’s military launched what it called a clearance campaign in northern Rakhine state in response to an attack by a Rohingya insurgent group. The campaign forced more than 700,000 Rohingya to flee to neighboring Bangladesh and led to accusations that security forces committed mass rapes and killings and burned thousands of homes.

Suu Kyi told world court judges in December that the exodus was a tragic consequence of the military’s response to “coordinated and comprehensive armed attacks” by Rohingya insurgents.

Thursday’s ruling came two days after an independent commission established by Myanmar’s government concluded there are reasons to believe security forces committed war crimes in counterinsurgency operations against the Rohingya, but that there is no evidence supporting charges that genocide was planned or carried out.

Phil Robertson, Human Rights Watch’s deputy Asia director, said the panel’s findings were “what would have been expected from a non-transparent investigation by a politically skewed set of commissioners working closely with the Myanmar government.”

At December’s public hearings, Paul Reichler, a lawyer for Gambia, cited a U.N. fact-finding mission report at hearings last month that said military “clearance operations” in Myanmar’s northern Rakhine state spared nobody. “Mothers, infants, pregnant women, the old and infirm. They all fell victim to this ruthless campaign,” he said.

Gambia’s Justice Minister Aboubacarr Tambadou urged the world court to act immediately and “tell Myanmar to stop these senseless killings, to stop these acts of barbarity that continue to shock our collective conscience, to stop this genocide of its own people.”

She urged the international community to press her to enforce the court’s order.