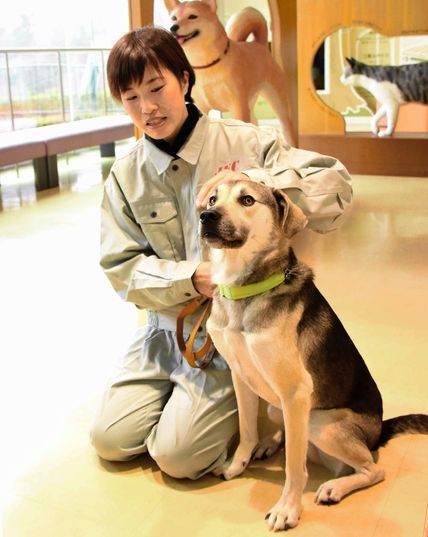 KAMIYAMA, Tokushima Prefecture--A stray dog that was on the brink of being euthanized has now been trained to save human lives.

It is reportedly rare for former strays to pass the JKC test. Fuga earned the certification on his first try.

“It was difficult to train him to detect ascending smells and bark out,” said Minako Kondo, the dog’s owner. “I believe his achievement shows even former stray dogs can be something.”

In a demonstration drill on Dec. 26 at the Tokushima Prefectural Animal Welfare Center, Fuga ran between four boxes and barked loudly when he sniffed out one containing a staff member. He also found another staff member hidden in a different container.

Fuga was caught in a cage set up by the local public health center in the Mimacho district of Mima in Tokushima Prefecture in March 2017 and was sent to the center.

With no collar and no signs of his owner, the dog was scheduled to be put down.

But in October that year, Kondo, who lives in Awa in the prefecture, visited the center and fell in love with the canine “at first sight.” She adopted the dog and named him after a friend’s pet.

Kondo recognized Fuga’s agility, friendliness to humans and placid nature, so her pet was found to have an aptitude for working as a rescue dog during emergencies.

Fuga started training a year later at the Neuman Dog School in Itano in the prefecture. There, he learned how to obey orders, such as walking with Kondo and staying put at certain locations.

In March last year, Fuga passed the prefecture’s rescue dog screening process that targets animals at the welfare center. He then got through the much tougher JKC exam in December.

Although prefecture-certified rescue canines are supposed to work only in the prefecture, JKC’s rescue dogs are sent to outside disaster areas on request to help find people buried under debris and collapsed homes.

“There are many ownerless dogs who have talent,” Kondo said. “I hope as many such dogs as possible will be given the chance to demonstrate their abilities.”

In fiscal 2018, around 1,370 dogs and cats were kept at the Tokushima animal welfare center. While 190 of them were returned to their owners and 310 found new masters, 860 were euthanized, according to officials.