VOX POPULI: Is coronavirus under control, or is there worse to come? 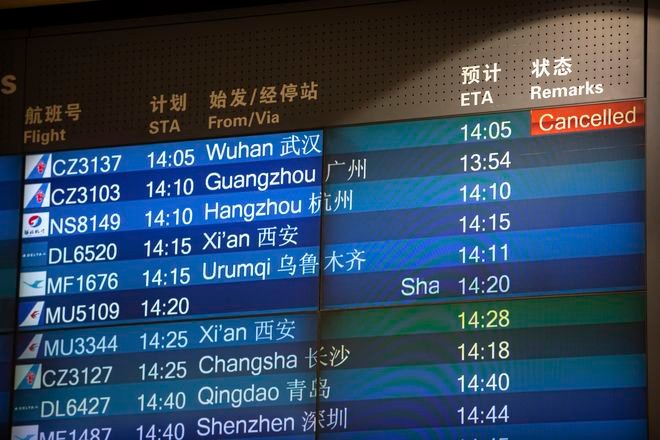 A display board shows a canceled flight from Wuhan at Beijing Capital International Airport in Beijing on Jan. 23. (AP Photo)

While pursuing "bunmei kaika" (attainment of "civilization and enlightenment") during the Meiji Era (1868-1912), Japan was repeatedly exposed to virulent infectious diseases of foreign origin.

Especially pernicious among them was cholera, which was dealt with mainly by isolating patients rather than treating them.

Areas with infected individuals were closed to all incoming and outgoing traffic, and barricades were erected at the entrances to streets lined with "nagaya" rowhouses.

Police officers were tasked with isolating the infected, which left the public more in dread of them more than the disease itself.

A publication by historian Shoji Tatsukawa (1927-2017), titled "Byoki no Shakaishi" (Social history of disease), cites a popular Meiji Era ditty which went to the effect, "No, no, no, we don't like police officers for leading the way to cholera, hey, hey, hey."

Our present scourge is a new type of pneumonia caused by coronavirus.

The central Chinese city of Wuhan, where numerous people have been infected, is now on a lockdown. I never imagined that such a thing could happen to an entire city in this day and age.

Cut off from the outside world with all its railway, air and other transit services suspended, this city of 10 million souls is in deep distress.

According to reports, convenience stores are running out of stock, and there are too few hospital beds. Japanese citizens working for Japanese corporations there are forced to remain at home. Their anxiety must be unbearable, not knowing how long the situation will last.

This infectious disease originating in China revives memories of the SARS (severe acute respiratory syndrome) outbreak of 2002 to 2003.

Compared with how Chinese authorities kept that epidemic under wraps for months, at least they are being more decent this time--or that's what I thought.

But now that the number of patients is spiking suddenly, I'm not sure anymore. Have the authorities withheld information again?

Real fear strikes when the object of dread is indefinite. Will the virus's infectivity and mortality rate remain more or less at the present level, or should we expect something worse?

I intend to keep a close eye on what experts around the world are going to find out.