‘High’ tsunami risk for hundreds of districts from Izu to Kyushu 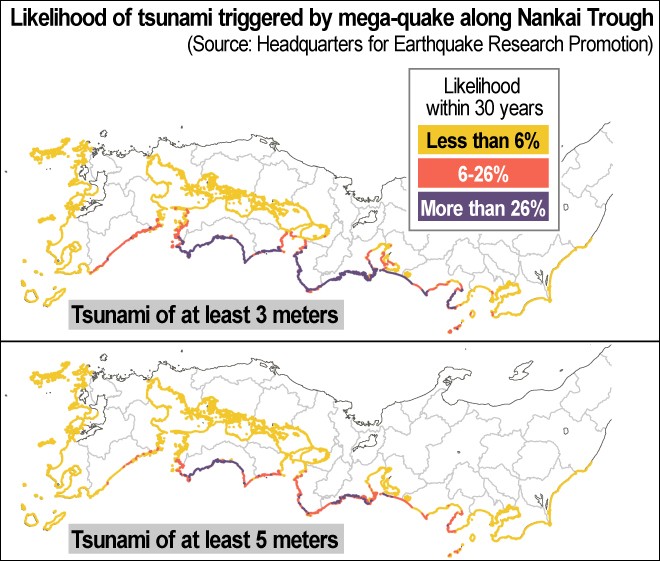 An anticipated offshore mega-quake in the Nankai Trough within 30 years would generate tsunami at least 3 meters high smashing into dozens of municipalities along a vast stretch of Pacific coastline from the main island of Honshu to Kyushu in southern Japan, according to a central government projection.

It was the first estimate of the probability of coastal regions, which include densely populated areas, being hit by towering tsunami following a magnitude-8.0 to 9 earthquake.

The Jan. 24 report by the Headquarters for Earthquake Research Promotion said 352 municipalities were at risk, of which 71 faced a "very high" chance of being hit.

In a 2012 study, the central government predicted an even larger class of tsunami spawned by a magnitude-9.0 class mega-quake originating in the Nankai Trough to allow for a worst-case scenario.

The Jan. 24 report said the latest projection offered the most realistic outcome in the event of such a disaster, but cautioned that much higher tsunami could not be ruled out.

The report was based on a simulation of 350,000 tsunami patterns, depending on where the mega-quake occurs and the extent to which tectonic plate boundaries slip.

Records of earthquakes in the Nankai Trough over the past 700 years formed the basis of the simulation.

The headquarters calculated the risk likelihood that each municipality faces within the coming 30 years by classifying the size of tsunami into three categories: ones at least 3 meters high, those at least 5 meters high and tsunami at least 10 meters high.

Three levels were used to categorize the risk likelihood: More than 26 percent (Very high), 6-26 percent (High) and less than 6 percent.

The report showed that 71 municipalities have at least a 26 percent chance of being battered by 3-meter or higher tsunami.

Among them are municipalities in Shizuoka Prefecture, such as those in the Izu Peninsula and Omaezaki, where the Hamaoka nuclear power plant is located, as well as most low-lying areas in Wakayama and Kochi prefectures. Southeastern parts of Mie and Tokushima prefectures as well as Oita and Miyazaki prefectures are also at risk.

The prediction showed that some parts of Mie and Kochi prefectures faced a 6-26 percent likelihood of being inundated by tsunami of at least 10 meters.

An event with a projected likelihood of at least 26 percent occurring within 30 years is equivalent to one that comes around every 100 years or so.

Likewise, a probability factor of 6-26% within 30 years is equivalent to one that strikes once or so between 100 and 500 years.

Tsunami in the 3-meter range warrant warnings of a giant wave that can destroy most wooden structures.

Tsunami just 30 centimeters high are enough to knock down people, according to experts.

In the event of one measuring 1 meter, many people would be swept to their deaths.

The latest report is intended to raise public awareness of the tsunami risk in coming years.

The prediction of the largest class of tsunami mentioned in the government’s 2012 report was based on scientific findings in the aftermath of the magnitude-9.0 Great East Japan Earthquake in 2011.

The 2012 report prompted local municipalities to take additional measures against tsunami as it warned that many communities could be inundated by much higher waves than previously anticipated. For example, Kuroshio, a town in Kochi Prefecture, learned it could expect to be hit by a tsunami of up to 34 meters in height.

The reaction of many residents was to resign themselves to the fact that there is little they can do to protect themselves from such a catastrophe.

The latest report is aimed at encouraging local authorities to at least make some sort of preparations, given that the long-anticipated earthquake in the Nankai Trough may not necessarily be the worst that could strike.

“It would be ideal if we are fully prepared for a worst-case event, but that is not the case with many local governments,” said Naoshi Hirata, chief of the Headquarters for Earthquake Research Promotion. “We should not give up and begin with what we can do.”

According to the 2020 report, areas projected to have a "high" likelihood of being struck by tsunami at least 10 meters high is limited.

But that does not hold true for areas projected to be hit by tsunami at least 3 meters high. Hundreds of municipalities are vulnerable along the stretch of Pacific coastline covering hundreds of kilometers.

The latest report said tsunami at least 3 meters or higher can destroy buildings and result in fatalities.

(This article was compiled from reports by Norikhiko Kuwabara and Senior Staff Writer Eisuke Sasaki.)