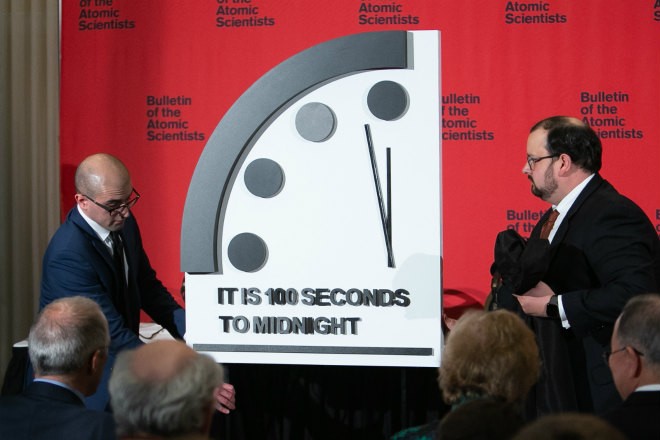 Members of the Bulletin of the Atomic Scientists announce the 2020 Doomsday Clock time on Jan. 23 in Washington. (Yuko Lanham)

Rather than in minutes, the countdown of the Doomsday Clock, which symbolizes the time until Earth's destruction, could now start in a matter of only 100 seconds, according to scientists.

“It is 100 seconds to midnight,” the scientists of the U.S. journal Bulletin of the Atomic Scientists on Jan. 23 issued a warning, highlighting the end of arms control treaties in the past year, the effects of climate change and cyber-based disinformation campaigns.

It is the first time the bulletin has issued its annual prediction in seconds.

The clock has lost 20 seconds since then, as “Humanity continues to face two simultaneous existential dangers--nuclear war and climate change,” according to a statement issued by the bulletin.

“It is the closest to Doomsday we have ever been in the history of the Doomsday Clock,” said Rachel Bronson, president and CEO of the bulletin. “We now face a true emergency--an absolutely unacceptable state of world affairs that has eliminated any margin for error or further delay.”

Bronson will attend the International Symposium for Peace, “The Road to Nuclear Weapons Abolition” in Nagasaki on Aug. 1, to sound the alarm over the threat and urge world leaders to take action.

It is the first time for Bronson and members of the bulletin to send such a message from a place where nuclear weapons were used. The United States dropped an atomic bomb on Nagasaki on Aug. 9, 1945, in the final days of World War II.

The symposium is sponsored by the Nagasaki city government, the Nagasaki Foundation for the Promotion of Peace and The Asahi Shimbun.

The bulletin was established in December 1945 following a proposal by J. Robert Oppenheimer, the U.S. scientist who led the Manhattan Project, which built the atomic bomb, and others.

Eugene Rabinowitch, the bulletin’s first editor-in-chief, was among seven scientists who drafted the Franck Report in June 1945, which  opposed dropping atomic bombs on Japan without warning.

Through the bulletin, Rabinowitch demanded scientists bear responsibility in the age of nuclear power and argued for the need of the international control of nuclear weapons.

The Doomsday Clock first appeared on the cover of the bulletin in 1947, when it showed the planet had only “seven minutes to midnight.”

When the former Soviet Union developed atomic bombs in 1949, and the United States stepped up production of nuclear weapons in reaction, the clock pointed to “three minutes to midnight.”

In 1991, the hands shifted back to “17 minutes to midnight” after the Cold War ended and the two nations signed the Strategic Arms Reduction Treaty (START).

The countdown was at the highest risk of starting from 1953 to 1959, when the nations accelerated hydrogen bomb development, pointing to “two minutes to midnight.”

The clock did not reach the same danger level until 2018 and 2019, in response to an increased pro-nuclear policy in the United States under President Donald Trump.

In his 2018 book, former Soviet President Mikhail Gorbachev, who was instrumental in hastening the Cold War's end, mentioned the Doomsday Clock and warned a second era of conflict between the countries was just around the corner.

Bulletin board member William Perry, 92, who served as the U.S. defense secretary under President Bill Clinton, is expected to deliver a keynote speech at the Nagasaki symposium.

For Perry, the Doomsday Clock now being set at 100 seconds before midnight means, “the prospect of a nuclear catastrophe is higher today than at any time during the Cold War,” he said in an email to The Asahi Shimbun.

“This danger is not understood by our leaders or by ordinary citizens,” he added. “If more people understood the danger, they would insist that their leaders take actions to lower the dangers we all face.”

Nagasaki Mayor Tomihisa Taue said the Doomsday Clock “visualizes the danger of today’s international affairs” and “gives us a warning and poses a question, ‘Would you just stand idly by and do nothing?’ ”

Taue said he hopes the symposium will bring together those who are determined that “Nagasaki will be the last atomic-bombed place,” and that they can “send a message that helps civic society demand an end to nuclear weapons.”

(This article was written by Yoshihiro Tai and Masato Tainaka, both of whom have specialized in areas of nuclear issues.)