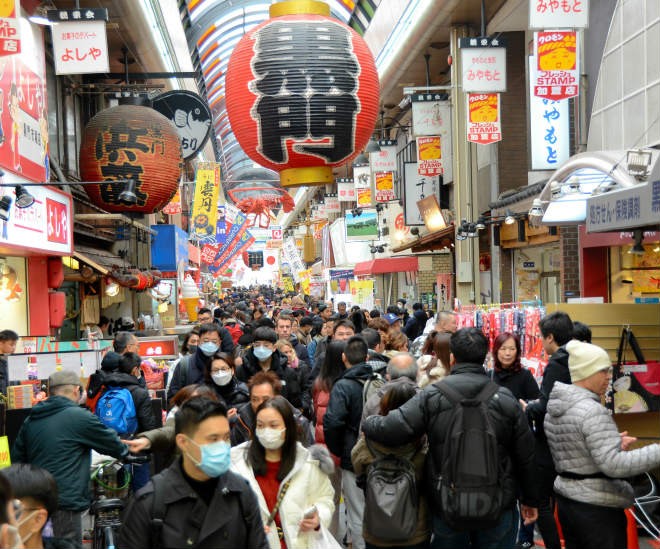 At this time of year, Japan's streets are normally teeming with Chinese tourists, an economic mainstay of hotels, department stores and other businesses that rely on tourism.

But not this Lunar New Year.

China's ban on overseas group tours by its citizens to help contain the coronavirus that apparently originated in the central city of Wuhan is expected to have a huge impact on the Japanese economy.

Hotels across Japan are already dealing with a wave of cancellations.

A Chinese party of seven canceled their booking at the Ibusuki Hakusuikan traditional ryokan inn in Ibusuki, southern Japan's Kagoshima Prefecture, on Jan. 25 owing to the group travel ban. This was followed Jan. 26 by a group of 20 from Shanghai cancelling their booking.

“We rely on Chinese tourists during this period," said reservations manager Shota Hamada. "The situation will seriously affect our business, but what can I say?”

Organizers of a popular event at the Ibusuki Hakusuikan, which features pounding “mochi” rice cake for three days from Jan. 25 and always draws a lot of Chinese tourists, were disappointed by the lack of Chinese faces this year.

At a tourist counter in Oita Prefecture's Beppu, known for its hot springs, all staff members began donning face masks from Jan. 25 to prevent infection .

“We normally have more Chinese tourists than from any other country now that visitors from South Korea have declined," a staff member said. "It's a worrisome event when Chinese tourist numbers also drop.”

In Osaka, the Namba Oriental Hotel in the city's Minami commercial district, said it had cancellations from five Chinese groups. Some of them said their flights were canceled.

“The only way we can deal with the situation is to prioritize security and safety first," said a staff member, adding that further cancellations must be in the cards with the blanket ban on group tours from Jan. 27.

The Takayama Green Hotel in Takayama, Gifu Prefecture, which is always full during the Takayama Festival held in spring, reported group cancellations. Chinese guests normally account for half the hotel's bookings each Lunar New Year season.

CONCERN ACROSS THE SERVICE INDUSTRY

Those working in the service industry are also deeply concerned about the situation.

A driver of a tour bus that dropped off Chinese passengers Jan. 26 at the outer market that still operates at the site of the former Tsukiji fish market in the capital's Chuo Ward said: “I worry about the infection, to be honest. But, canceled tours could cost me my job. That also makes me worry.”

The driver in his 50s now always wears a face mask.

A Chinese passenger in her 60s, one of nearly 50 who took the tour, bought dried squid at the market. She said with a smile: “It will be all right. The spread of coronavirus will stop soon.”

In Tokyo’s Asakusa district which is also popular among Chinese tourists, a rickshaw runner in his 20s said: “We're bound to face an economic impact. But we also worry about our health as we aren't allowed to wear masks. As Asakusa is a place where people from around the world gather, I keep thoroughly washing my hands and gargling."

China's travel ban targets only group tour visitors. In 2019, visitors from China totaled 9.59 million. Officials expect about 40 percent of that figure to be affected by the ban.

Tourist spending, a pillar of revenue at retail and department stores, will also be badly hit as Chinese are the largest customers of such outlets.

In January, sales to foreign visitors were more than 30 percent higher than in the corresponding period of last year as of Jan. 25.

“The group travel ban will definitely affect our sales, but there's nothing we can do about it," said a store representative.

At Daimaru Shinsaibashi department store in Osaka, foreign visitors account for 30 to 40 percent of sales. Of those sales, more than 90 percent are led by Chinese who tend to purchase high-end brand items and cosmetics.

The number of individual Chinese visitors has been increasing, but many arrive on group tours by bus. “The effect of the ban is going to be huge,” said a store representative.

The Japanese government set a goal of attracting up to 40 million foreign tourists this year, when the Tokyo Olympics and Paralympics will be held. Among measures to achieve that target was its decision to ease visa restrictions.

Japan had been expecting Chinese tourists to pick up the slack following a massive drop in visitors from South Korea owing to a diplomatic row between the two countries. Chinese visitor numbers had increased for six consecutive years by 2019.

China apparently prohibited group tours because it is easier to implement the ban through travel agencies. Individuals can still travel, however. The central city of Wuhan, with a population of 11 million, remains under lockdown.

About 10 percent of all Chinese tourists to Japan make visits during the Lunar New Year’s holiday period. For this reason, the tour ban is expected to have a major impact on Japan's economy.

According to the Japan National Tourism Organization, visitor numbers from China had risen more than 20-fold as of last year, compared with 2003 when Severe Acute Respiratory Syndrome (SARS) raged.

In 2003, Chinese visitor numbers dropped off temporarily in a spectacular way. Now that much of Japan's economy relies on tourism, the impact from the group travel ban is expected to be much more severe than in 2003.

GMO Internet Inc., a leading internet firm, decided that about 4,000 employees, most of its work force in Japan, will work from home from Jan. 27. The company said the decision was to secure the safety of employees as coronavirus cases had been detected in Japan. It will also try to ensure that its Japanese staff in China return home.