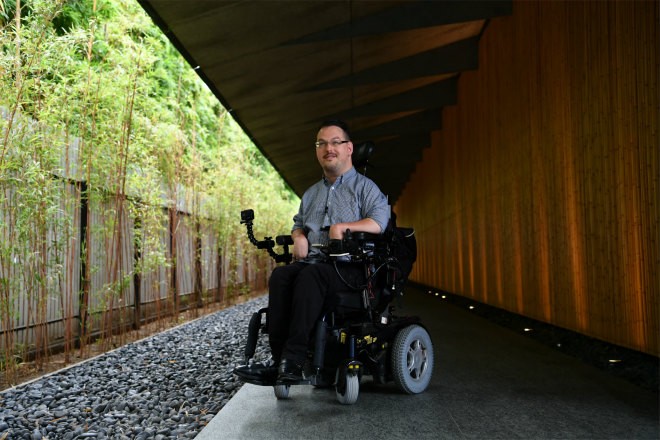 Barry Joshua Grisdale goes through a corridor with bamboo trees on both sides at the Nezu Museum. (Yosuke Fukudome)

Editor’s note: The theme of Inclusive Tokyo is to explore the metropolis from the viewpoint of wheelchair users and people with disabilities. Tourism officials, with their sights set on the 2020 Olympic and Paralympic Games and an anticipated influx of foreign visitors, are working to make public transportation and popular destinations more accessible. In this series, Barry Joshua Grisdale, a 39-year-old Tokyo resident who uses a wheelchair, navigates iconic locations in the capital to assess progress in creating a barrier-free environment.

Tokyo's Nezu Museum, with its lush gardens, is a popular destination for city dwellers and foreign visitors seeking a tranquil spot to escape the din of the capital.

Canadian-born Barry Joshua Grisdale, who prefers to be referred to as Josh, visited the facility to see how its barrier-free environment measured up for wheelchair users like himself.

The museum in the Minami-Aoyama district in Tokyo’s Minato Ward houses 7,000 pieces of ancient art from Japan and the East.

Beginning in 2006, the museum underwent three and a half years of renovations to its facilities, which included incorporating a barrier-free design and making its exhibition area 1.6 times larger.

Renowned architect Kengo Kuma, whose work includes the new National Stadium built for the 2020 Tokyo Olympics, oversaw the redesign, which features a 50-meter corridor with bamboo trees on both sides, popular with foreign visitors for its Instagram-ready charm.

When renovations were designed, Nezu Museum staff visited numerous museums in Europe and the United States that are equipped for people with disabilities to get ideas for their new floorplan.

The heights of the museum's new exhibits were adjusted so they wouldn't tower over visitors in wheelchairs and rooms were designed with plenty of space for them to pass through easily.

The museum's floors were designed to be mostly flat, without rises or drops, to allow wheelchair users easy access to any exhibition room.

A paved path to the museum’s main building was built with a gentle slope to ease the strain on people using electric wheelchairs or helpers pushing wheelchairs.

After passing the reception area on the first floor of the main building, Josh was impressed by a spacious hall where massive Chinese stone sculptures are on display.

“(Wheelchair users) are almost in no danger of touching other visitors and exhibited objects,” he said.

Josh was particularly impressed by the museum's multipurpose bathrooms, which are labeled as “for everybody,” located on the first floor and the first basement level.

Each toilet seat has an upholstered back rest, which people with disabilities can use for support. The feature makes it easier for helpers to position a person who can't move their legs and help them on and off with their trousers.

“It is obvious that the museum staff have listened to the voice of users,” Josh said.

After taking an elevator to the second floor, Josh checked out bronze ware from ancient China.

The items in the glass showcase set up in the middle of an exhibition room were displayed with consideration given to wheelchair users’ eye level.

Josh’s eye level is at a height of about 128 centimeters, roughly the same as an early elementary student's.

“Wheelchair users often look upward to see exhibited works,” Josh said. “I think this is something only the Nezu Museum could do.”

Visitors without disabilities can also enjoy a different 3-D view of the works.

Behind the museum’s main hall is the Nezu Cafe, where the vivid green of the museum's gardens can be seen through windows on three sides.

The heights of the seats at the cafe's counter were designed so visitors like Josh, who have impeded hand movement, can easily lean over to use a straw to drink just by slightly bending forward.

The counter also has lots of legroom so large wheelchairs made outside Japan can fit without any trouble.

At the Japanese garden on the south side of the main hall, uneven stepping stones were replaced with flat stone pavement.

Footpaths in the garden that pass by ponds have also been widened to make extra room so people in wheelchairs and other visitors can pass each other.

Prior to the renovations at the museum, the outer perimeters of the garden were gravel, a daunting task for a wheelchair to travel over. Now they're paved, and wheelchair users can go around the garden in about 20 minutes.

Despite the large improvements to the museum to make it more accessible for people with disabilities, Josh said he would recommend wheelchair users visit the facility accompanied by a helper as some areas of the grounds still have elevations of as much as 12 meters.