Japan to fly 200 nationals out of virus-stricken Wuhan Jan. 29 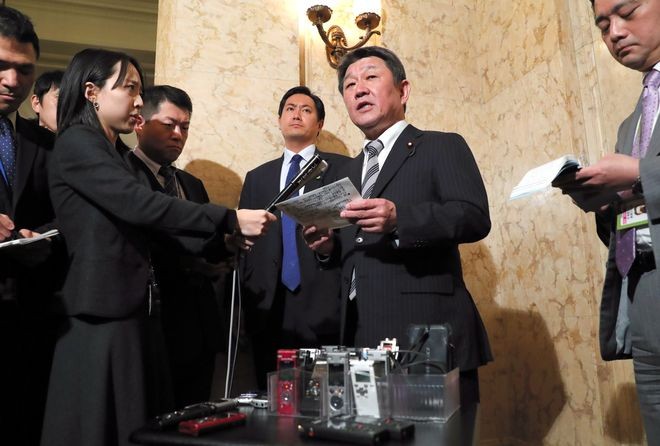 Foreign Minister Toshimitsu Motegi tells reporters on Jan. 28 of the government's plan to send a chartered plane to the virus-stricken city of Wuhan to bring Japanese citizens back to Japan. (Takeshi Iwashita)

The first batch of Japanese nationals from the virus-stricken city of Wuhan will return by chartered plane on Jan. 29, as fears grow about the spread of the deadly strain.

The new coronavirus has caused at least 106 deaths, with the number of infected approaching 5,000 worldwide. Wuhan, where the virus is believed to have originated, has been on lockdown by authorities since last week.

The Japanese government plans to dispatch its first plane to the city in Hubei province on the evening of Jan. 28 to pick up about 200 Japanese citizens, Foreign Minister Toshimitsu Motegi said.

Officials initially attempted to dispatch the plane the morning of Jan. 28, but there was a delay, as more time was required by China to approve the flight's arrival.

Chief Cabinet Secretary Yoshihide Suga said at a news conference after a Cabinet meeting the same morning, "We're standing by, waiting for China's 'OK,' to send the plane."

He said that the government is considering transporting relief supplies, such as masks and protective clothing, in the plane.

The government classified the coronavirus as a "designated infectious disease"--Japan's fifth such designation--at the meeting, effective Feb. 7. MERS (Middle East respiratory syndrome) was given the same designation in 2014.

About 650 people are seeking to return to Japan, according to Motegi. The first plane will depart from Wuhan on the morning of Jan. 29 and arrive by noon. A second flight is expected in the following days.

During a meeting of junior coalition partner Komeito on Jan. 28, a foreign ministry official added: "Two flights may not be enough. We're not excluding the possibility of using a government plane."

One doctor, two nurses and a quarantine officer will be on board the plane, the health ministry revealed the same day. As there will be a quarantine process in place, if a doctor determines that an individual has a high fever, they may be prevented from boarding.

With the infectious disease designation, patients who have contracted the virus, which causes pneumonia-like symptoms, can be advised to be hospitalized or prohibited from working within a year, as with other such diseases. They can be forcibly hospitalized if they disobey the recommendation.

With related medical costs paid using public funds, doctors who treat such patients are obligated to report all cases to public health centers.

The government also decided to designate the virus as a quarantine infectious disease at the meeting, giving quarantine officials the authority to force those suspected of infection to undergo examinations and tests.