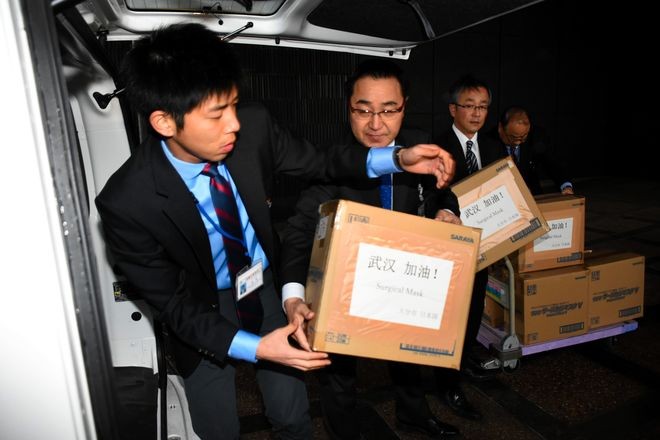 BEIJING--An outpouring of gratitude has been expressed on Chinese social media for Japan’s efforts to help the city of Wuhan deal with the coronavirus crisis.

Japan sent about 20,000 face masks and 50 sets of protective gear to the central Chinese city on Jan. 28 via a chartered plane that was dispatched to bring home Japanese nationals.

A news video featuring Foreign Minister Toshimitsu Motegi saying he wants to thoroughly support China was posted on China’s Twitter-like Weibo site on the afternoon of Jan. 27. By the morning of Jan. 29, it had been viewed more than 20 million times.

A repost of the video gained more than 140,000 likes, and comments, such as “I was touched,” have continued to be posted.

One Weibo post had a picture of surgical masks in boxes with “Fight on, Wuhan” written in Chinese. The boxes were sent by the city of Oita, which has sister-city relations with Wuhan.

Another picture showed a supermarket in Japan with a banner, written in Chinese, that said, “Let’s support each other.”

A Weibo user noted that Japanese rescuers had joined relief efforts in the quake-devastated province of Sichuan in 2008.

The Chinese government has banned group travel overseas, raising concerns in Japan about a potential drastic decrease in tourism revenue.

In response to media coverage about such worries, one Weibo poster wrote, “After the coronavirus is gone, I will definitely go to Japan to support them.” Another user wrote: “I want to buy a lot of Japanese goods.”

cap)Oita city staff load masks into a car deliver them to Wuhan at the Oita city office on Jan. 27. (Kei Kobayashi)