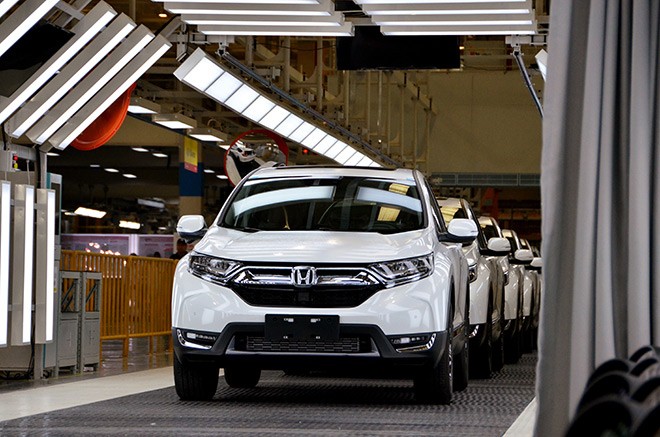 Japanese companies are feeling the impact of the coronavirus outbreak as they cut back their operations in China, rethink strategies about reopening factories once the scare is over and impose a ban on business trips there.

Many Japanese companies have issued travel bans to China, regardless of the destination, amid reports the deadly virus is rapidly spreading even though the central city of Wuhan, where it is believed to have originated, remains under lockdown.

Honda Motor Co. announced Jan. 28 it will postpone a resumption of its motorcycle manufacturing operations in a venture jointly operated by a Chinese partner to February.

The company's motorcycle business is based in Shanghai. The factories were expected to reopen after the Lunar New Year holiday ends on Jan. 30.

But Shanghai authorities urged businesses in the city, including Honda, to put off restarts as the disease is moving rapidly beyond Wuhan in Hubei province to other parts of China.

Honda said it will postpone the restart of its main office in Shanghai to Feb. 10 or later, and that of its motorcycle factories in Tianjin and Taicang in Jiangsu province to Feb. 9 or later based on directives from local authorities.

The delays are certain to hit Honda hard as the motorcycle factories produce 850,000 units annually for nearly 40 percent of Honda’s annual output of 2.1 million units in China.

Honda also operates three car factories in Wuhan. Its Japanese employees there are expected to return to Japan on aircraft chartered by the Japanese government.

Toilet maker Toto Ltd. will also delay reopening its two Shanghai-based factories that manufacture lavatory basins and Washlet electronic toilet seats. The one for lavatory basins was initially scheduled to restart Jan. 31, and the one for the Washlet on Feb. 2.

“It is difficult to accurately gauge the impact of the delay,” said a Toto representative, adding that the company may move its production out of China.

“We are closely watching developments, as we have no clue how long the infection crisis will continue,” a Kyocera official said.

Fujitsu General Ltd., which operates factories to make air conditioners in Shanghai and Wuxi, a city in Jiangsu province, said it will consider moving its manufacturing to Thailand if containing the outbreak is expected to be a prolonged process.

The company said employees working at the factories in Shanghai and Wuxi come from all over China and may not be able to return to their work even after the Lunar New Year due to travel restrictions imposed by Chinese authorities.

An official with a major automotive parts supplier expressed concern that the company factory in Amoy, Fujian province, may be forced to adjust production due to the shutdown of Japanese carmakers’ Chinese factories.

“We cannot say we will be OK in this crisis as we are located outside Wuhan,” said the official. “We need to make our next move while carefully watching developments in the supply chain throughout China.”

The negative impact will not be limited to manufacturing factories.

Fast Retailing Co., which operates fast fashion retail brand Uniqlo, said the number of Uniqlo outlets closed temporarily in China had expanded to 100 as of Jan. 28. The company operated 750 Uniqlo outlets in China at the end of the last year.

The outlets were closed in line with directives issued by local authorities or the management of the facilities in which they are located.

As to when the shops will reopen or whether more stores will close in coming weeks, a Uniqlo public relations official said, “We cannot say at this stage.”

As the crisis deepens, a growing number of Japanese companies have moved to restrict business trips to any destination in China.

On Jan. 28, Kansai Electric Power Co. issued a travel ban that will affect about 20,000 employees.

Shiseido Japan Co., a leading cosmetics maker, announced a blanket ban on business trips to China the same day. It previously prohibited travel to Wuhan and nearby municipalities.

Nishi-Nippon Railroad Co., based in Fukuoka, said two employees assigned to an international logistics subsidiary in Guangzhou, Guangdong province, returned to Japan on Jan. 27 at their own request.

To prepare for a protracted period of crisis, Toyota Motor Corp. is recommending that family members of its employees working at its plants in Tianjin and Guangzhou return to Japan temporarily.