EDITORIAL: Japan needs to prepare for long battle to contain the coronavirus 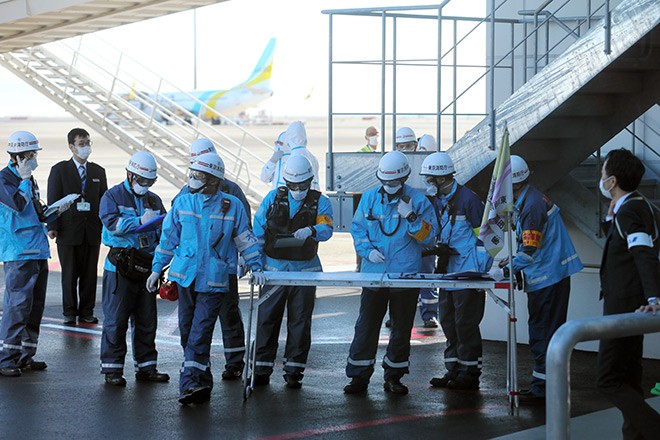 The coronavirus outbreak that started in Wuhan, China, keeps expanding at an alarming speed.

The number of confirmed cases in China has surpassed 6,000, with more than 100 deaths due to respiratory illness caused by the novel coronavirus reported.

In Japan, a man who has never visited Wuhan in China has been confirmed with the pneumonia-like illness believed to be caused by the new strain of coronavirus.

This represents the first confirmed case in Japan of a patient who has caught the deadly virus from another patient at a place far from the epicenter of the virus.

Experts have warned about the possibility that the virus could spread from an infected person to another person during the incubation period even before any symptom appears.

If this is the case, the number of cases is likely to continue growing at an accelerating speed. We need to brace ourselves for a long, drawn-out battle to contain the virus.

On Jan. 29, a special charter flight transporting 206 Japanese from Wuhan arrived at Tokyo's Haneda Airport. They have been instructed by health authorities to remain in their homes or hotels while monitoring their own health for at least two weeks even if they do not show any symptoms of the illness at the moment.

More flights are planned to evacuate Japanese who remain in Wuhan. People involved should take care to ensure that Japanese citizens who have returned from the Chinese city will spend the following days in a calm, comfortable environment.

The government has labeled the respiratory illness caused by the new coronavirus, named "2019-nCoV," as a "designated infectious disease," which allows authority to hospitalize patients in Japan forcibly at taxpayer expense.

Under the program, patients will be treated at medical institutions that have the special equipment and facilities required by the health ministry to deal with such infectious diseases.

But there is a good chance that infected people may unknowingly visit hospitals or clinics that are not designated for treating coronavirus patients.

It is therefore necessary to ensure quick and effective responses no matter where a patient is discovered.

It is also vital for the central and local governments to clearly define their respective roles and responsibilities while sharing information effectively to prevent any lapses or failures.

Lessons from similar past experiences should be remembered. During the 2009 swine flu pandemic caused by the new H1N1 virus, the Japanese government focused on preventing the spread of the virus on measures at airports for people who have traveled to affected areas.

But a high school student who had not been in such areas was confirmed to be infected. The misguided strategy failed to prevent the spread of the virus in Japan.

In addition, authorities mistakenly assumed that the virus was highly toxic. Actually, the number of patients with relatively mild conditions soared. Concerns that designated medical institutions could be overwhelmed by a flood of patients caused confusion.

The challenge of dealing with a new infectious disease often requires a delicate balancing act between two conflicting requirements. On one hand, it is crucial to avoid underestimating the scale and magnitude of the outbreak while taking measures based on constantly updated information and knowledge.

On the other hand, it is also important to minimize the measures to limit the freedom of action to avoid unnecessarily restricting human rights.

If the number of cases increases to levels threatening to overwhelm the capacity of designated medical institutions, authorities should consider allowing patients with mild conditions to be admitted into hospitals or stay at home to recuperate.

The World Health Organization, which has decided not to declare the outbreak to be a public health emergency of international concern, needs to provide effective leadership for the battle to contain the epidemic.

In addition to urging the Chinese government to disclose necessary and sufficient information on a timely manner, the WHO should also take active steps to provide material and human resources to help the country treat patients and stop the spread of the virus.

Japan should also do all it can to support the efforts.