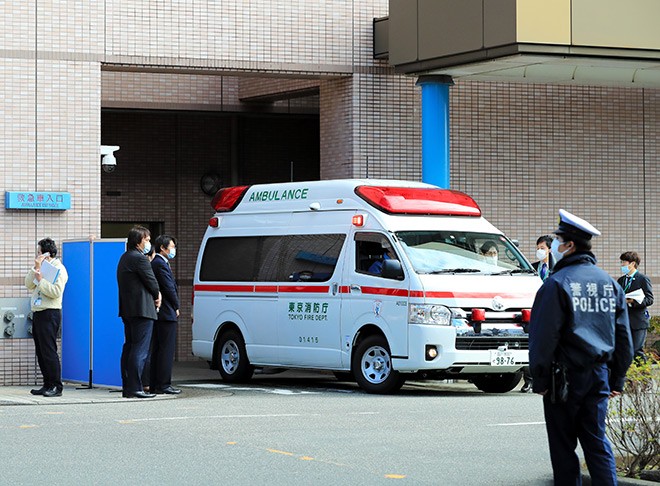 An ambulance believed to be carrying a person with coronavirus symptoms enters Ebara Hospital in Tokyo’s Ota Ward on Jan. 29. (Hikaru Uchida)

The health ministry is tracking down people who came in contact with three Japanese who were confirmed infected with the new coronavirus after they returned from Wuhan, China, on a government-chartered flight.

The ministry on Jan. 30 said it is also urging two individuals who took the same flight to drop their refusal to be tested and be checked for the deadly and contagious virus.

Like the three people who were confirmed infected, the two test-averse passengers did not show any coronavirus symptoms when they landed at Haneda Airport in Tokyo on Jan. 29.

However, one of the three, a man in his 50s, complained about a runny nose and sore throat after he visited the National Center for Global Health and Medicine in Tokyo’s Shinjuku Ward. He was admitted to a hospital, where his temperature rose to 38.7 degrees.

He tested positive for coronavirus infection later that night, and is now in stable condition, the ministry said.

The other two, a man in his 40s and a woman in her 50s, visited the same center.

At the center, they became the first people in Japan diagnosed as being infected with the new coronavirus without displaying any symptoms, according to the ministry.

They were expected to be admitted to a health care facility in Chiba Prefecture.

After their flight, the man and the woman stayed at a hotel in Chiba Prefecture. They took separate rooms, but both shared their room with someone else.

The ministry has collected information on people who came in contact with the two on the aircraft, at the hotel and on other occasions.

“I can’t deny the possibility that a person without showing symptoms passed the infection on to others,” Takaji Wakita, head of the National Institute of Infectious Diseases, said at a news conference on the morning of Jan. 30. “We need to make a close examination and follow the course of these two who don’t have symptoms.”

The number of people confirmed to be infected with the new virus in Japan has risen to 11.

The first government-chartered plane brought back 206 Japanese nationals from the city of Wuhan in Hubei province, the epicenter of the outbreak of the deadly disease, on Jan. 29.

Irrespective of the presence or absence of symptoms, 204 of the passengers underwent virus inspections.

The ministry said it will keep trying to persuade the two people who refused to take the test to accept the inspection.

The ministry also decided to abandon the double-up hotel room arrangements for returnees who don’t display any symptoms.