13 on 2nd flight from Wuhan show symptoms of coronavirus 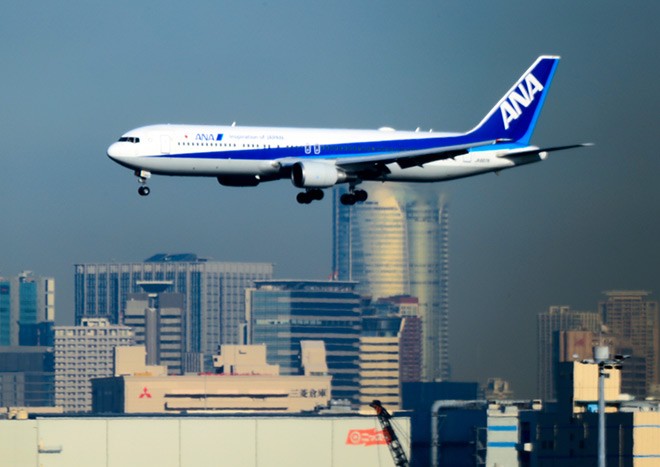 The second government-chartered flight lands at Tokyo’s Haneda Airport on the morning of Jan. 30. (Hikaru Uchida)

Thirteen Japanese who returned to Japan on Jan. 30 from Wuhan were taken to medical institutions as they exhibited symptoms of infection with the new coronavirus spreading through China.

The 13 were part of the 210 Japanese nationals in the second contingent to return to Japan on a government-chartered flight from Wuhan in Hubei province. The All Nippon Airways plane landed at Tokyo’s Haneda Airport at about 8:50 a.m.

According to sources, two Japanese who tried to board the plane in Wuhan were stopped by Chinese authorities based on health checks conducted there.

At his morning news conference on Jan. 30, Chief Cabinet Secretary Yoshihide Suga said 13 of the returnees were not feeling well when they disembarked from the plane.

The chartered plane left Haneda at about 10 p.m. the previous evening. Doctors and health inspectors sent by the government examined the passengers, and those found to have suspect symptoms or a fever and respiratory problems would be transported to medical institutions specializing in dealing with infectious diseases.

In addition, two nurses from the Ground Self-Defense Force were also on board the second charter flight.

The government asked that passengers without obvious symptoms  agree to be transported by a bus provided by the government for virus tests at the National Center for Global Health and Medicine in Tokyo's Shinjuku Ward.

The procedure was part of the protocol set up for the first ever chartering by the government of planes to repatriate Japanese nationals from a nation hit with a spreading infectious disease, which was followed by the first charter flight the previous day.

Two passengers who returned on the first charter flight refused to go to the center.

Asked about their refusal at the Jan. 30 Upper House Budget Committee, Prime Minister Shinzo Abe said, "It is very regrettable. From the second contingent and later flights we will take more apparent measures to obtain (the consent) of the passengers."

With the expected increase in returning Japanese from Wuhan in the coming days, the government is looking for locations in Tokyo where the returnees can be quarantined until it is confirmed that they are not infected with the coronavirus. The National Police Academy in Fuchu in western Tokyo as well as a training institute of the Finance Ministry in the capital's Kita Ward are among the sites under consideration.

In addition, a private-sector cargo ship chartered by the Defense Ministry is also being considered to accommodate the returnees.

According to a government source, there are still about 300 Japanese nationals in China who want to return to Japan. More charter flights are planned as talks continue with Chinese officials to coordinate the repatriation of all those who want to leave.

With the increasing number of those in Japan who have been infected with the coronavirus, the government set up a special task force headed by Abe on Jan. 30 to deal with the problem.

The health ministry on Jan. 30 confirmed a total of 11 cases of infection in Japan.