Guide on same bus as infected driver diagnosed with coronavirus 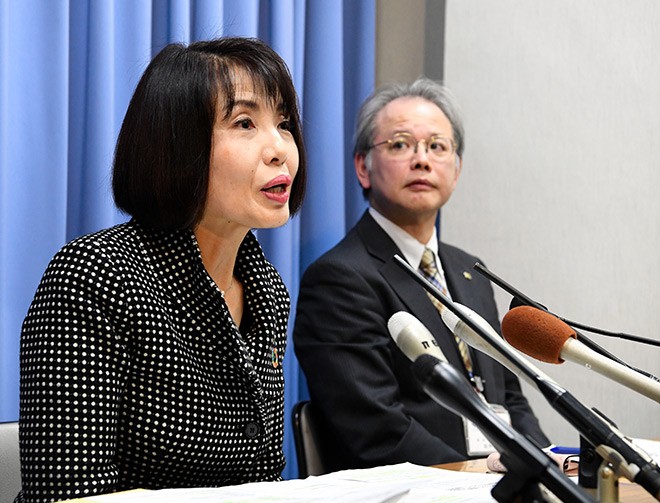 Mutsuko Fujii, left, chief of the Osaka prefectural government’s health and medical care department, announces on Jan. 29 that a woman living in Osaka Prefecture has been infected with the new coronavirus. (Kenta Sujino)

A tour guide working on the same bus as a driver who tested positive on Jan. 28 for the coronavirus, was also confirmed to have the illness the next day, the health ministry said Jan. 29.

Between Jan. 12 and Jan. 17, the guide, who lives in Osaka Prefecture and is a foreign national in her 40s, worked on a bus taking tourists from Wuhan from Tokyo to Osaka. She had not left Japan in the past month.

After developing a fever on Jan. 20, she saw a doctor in the capital.

The next day, as her fever failed to recede, she visited another medical institution for a check, but as she showed no symptoms other than fever, staff there sent her home with advice to get a follow-up examination if her condition did not improve.

The woman contacted a public health center and was hospitalized at a medical institution in Osaka Prefecture as she was coughing, suggesting she might have pneumonia.

Though it is highly likely that the guide was infected inside the tour bus, it is unclear if this was due to contact with the driver, or from tour participants, the ministry said.

The driver, a Nara Prefecture resident in his 60s, developed symptoms including chills, cough and joint pain beginning on Jan. 14.

He was hospitalized on Jan. 25 at a medical institution in the prefecture after he was confirmed to have symptoms of pneumonia.