Akihito given MRI brain scan after fainting at his residence 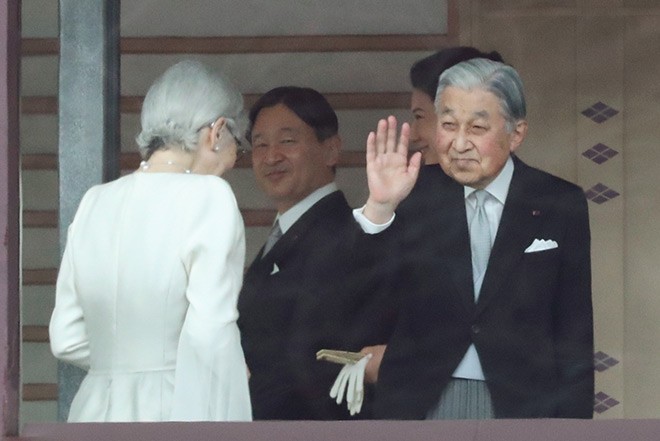 Emperor Emeritus Akihito waves to people gathered at the Imperial Palace on Jan. 2, the first public appearance this year of the imperial family. (Tatsuya Shimada)

Emperor Emeritus Akihito underwent an MRI brain scan on Jan. 30 after fainting the previous evening at his residence in the Imperial Palace grounds.

Officials of the Imperial Household Agency said Empress Emerita Michiko was by her husband's side at the time and summoned a doctor with the agency who found Akihito still unconscious and making sounds like snoring.

Akihito, 86, later regained consciousness, but agency officials conducted the MRI scan at the Imperial Household Hospital. Although no signs were found of a stroke, agency officials will continue to monitor his health.

According to agency officials, Akihito showed signs of cerebral anemia in July 2019 and he temporarily had difficulty standing, forcing him to crouch.

Akihito abdicated the Chrysanthemum Throne on April 30 in favor of his eldest son, Naruhito.

Caption: Emperor Emeritus Akihito acknowledges the crowd gathered at the Imperial Palace on Jan. 2, the first public appearance this year of the imperial family. (Tatsuya Shimada)