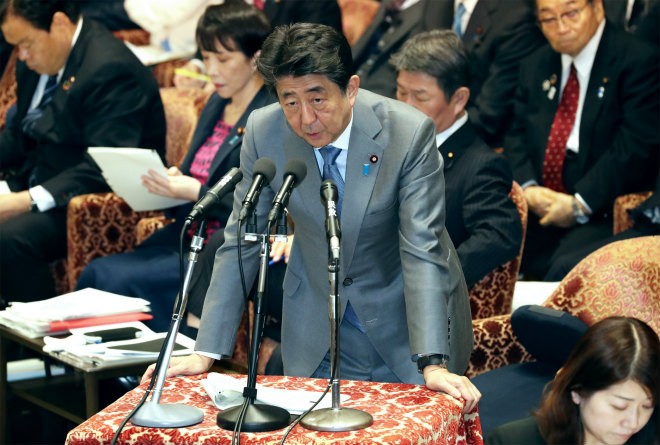 When I reported on then-Texas Governor George W. Bush's presidential campaign two decades ago, I was stunned by the profusion of his verbal slip-ups.

For instance, he used the objective personal pronoun "her" where he should have used the nominative case "she." And instead of "children," which is a plural noun, he said "childrens."

His propensity for gaffes continued into his presidency. He once got APEC and OPEC mixed up.

But U.S. citizens at large seemed not to really mind. In fact, Bush's habitual bloopers served to endear him to the public. TV talk show hosts made fun of them, and books on "Bushisms," as such utterances came to be known, flew off the shelves.

This week, we got one from our Prime Minister Shinzo Abe.

Grilled in the Diet about the circumstances that led to his numerous local supporters being invited to the publicly funded cherry blossom viewing events he hosted, he came up with a singularly "creative" explanation.

Splitting hairs over the Japanese expressions "tsunoru" and "boshu suru," both of which share the same kanji, Abe explained that his intention was simply to "invite" (tsunoru) his guests, not to "recruit (boshu suru) them."

He went on to elaborate that "tsunoru" denotes "asking only a select group of people to attend," whereas "boshu suru" means to "advertise an event to the general public."

That was the first time I ever heard of such a distinction.

And it's irrelevant, really. Nothing changes the fact that Abe did his supporters a special favor.

A hashtag was created to jokingly differentiate "tsunoru" from "boshu suru," and posters gamely started flooding social media sites with comments such as "Hiding something doesn't mean covering it up" and "Holding someone's hand isn't a handshake." I could go on citing other examples forever.

All this reminded me of Abe's numerous other "offbeat" utterances over the years. Here's one classic: "I am the head of the legislature."

In President Bush's case, his slip-ups and flubs sometimes worked in his favor.
What about Abe?

Vox Populi, Vox Dei is a popular daily column that takes up a wide range of topics, including culture, arts and social trends and developments. Written by veteran Asahi Shimbun writers, the column provides useful perspectives on and insights into contemporary Japan and its culture