Japan ramps up virus measures, banning entry for those infected 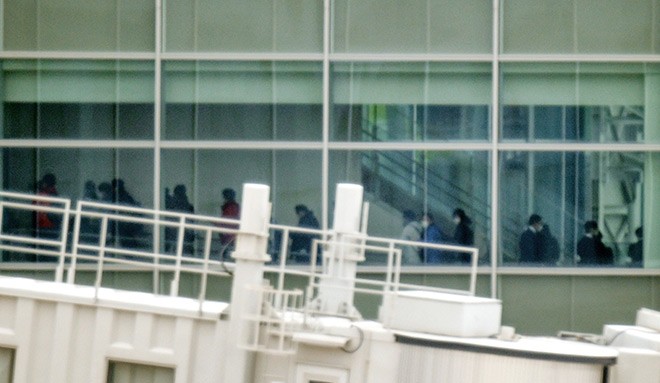 Passengers disembark from the third government-chartered flight from Wuhan that landed at Tokyo's Haneda Airport on Jan. 31. (Kotaro Ebara)

Prime Minister Shinzo Abe is stepping up measures to prevent the deadly coronavirus from spreading, including barring anyone infected with the strain from entering Japan.

The move comes following the World Health Organization's declaration of the virus outbreak as a global emergency on Jan. 30. More than 10,000 people have been infected by the strain, which is believed to have originated in the central Chinese city of Wuhan, resulting in more than 200 deaths.

At the Jan. 31 session of the Lower House Budget Committee, Abe said that a Cabinet ordinance to classify the coronavirus as a "designated infectious disease" would take effect on Feb. 1, six days earlier than originally planned.

“If an infected individual tries to enter Japan, we will ban their entry,” Abe said. “Even if it can't be confirmed whether they are infected, we'll consider further steps as soon as possible to enhance immigration control."

A third government-chartered flight arrived at Haneda Airport in the capital on Jan. 31, carrying 149 passengers. A total of 565 Japanese nationals have been repatriated over a three-day period from Wuhan, which has been on lockdown by authorities since last week.

Nine of the passengers on the latest flight complained of not feeling well and were taken to hospitals in Tokyo. Those without symptoms were taken to the National Center for Global Health and Medicine in Tokyo’s Shinjuku Ward to test for the coronavirus.

The Abe Cabinet approved labeling the coronavirus a designated infectious disease on Jan. 28. As there are penalty provisions for those who violate related prevention regulations, the government initially felt a 10-day period would be necessary to adequately notify the public.

Under the designation's provisions, the government can ban individuals infected with the virus from entering Japan and recommend patients enter hospitals, or restrict their work activities. Those who do not obey such recommendations could be forcibly hospitalized.

Medical expenses for treating the coronavirus will be covered by public funds, and medical institutions will be required to report all cases to the local public health center.

Abe also said that the government was retracting an earlier decision to ask those who took government-chartered flights from Wuhan to pay a charge of 80,000 yen ($730), the approximate cost of a one-way economy ticket between the city and Haneda. All such travel expenses will be shouldered by the government.

The latest returnees were to be quarantined until negative virus test results could be confirmed. The individuals are staying at the National Institute of Public Health in Wako, Saitama Prefecture, and the Customs Training Institute in Kashiwa, Chiba Prefecture, among other locations.

At a Jan. 31 news conference, Chief Cabinet Secretary Yoshihide Suga said about 140 Japanese nationals remain in Hubei province, where Wuhan is located, and are seeking to return to Japan. A fourth charter flight will likely be dispatched early next week, according to sources.