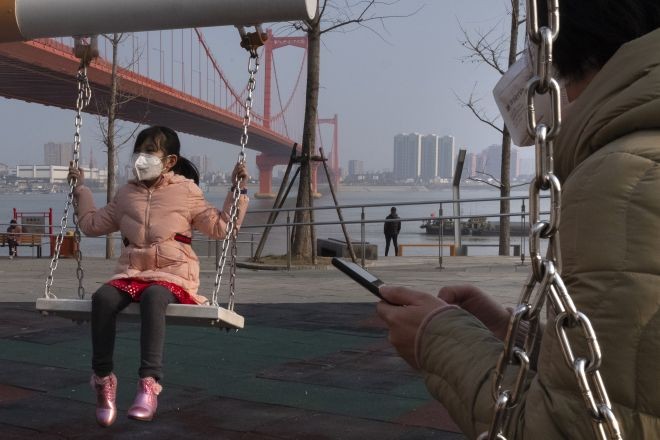 A girl wears a face mask as she plays on a swing near the Yingwuzhou Yangtze River Bridge in Wuhan in central China’s Hubei province, on Jan. 29. (AP Photo)

JIUJIANG, China--People are leaving and entering China’s Hubei province by foot over a bridge spanning the Yangtze river despite a virtual lockdown on vehicle traffic due to a coronavirus epidemic that has killed about 200 people.

The Yangtze marks the dividing line between Jiujiang in Jiangxi province and Huanggang in neighboring Hubei, one of the cities hit hardest by the coronavirus outbreak and now sealed off from the rest of China to try to contain the pathogen.

But the foot traffic over the Yangtze shows the lockdown is permeable, raising doubts over its effectiveness and providing a glimpse at life inside the epicenter of what the World Health Organization (WHO) has called a global emergency.

Wu Minzhou, a 40-year-old business owner who was fishing near the bridge on the Jiangxi side, said he was worried about the exceptions being made for people leaving Hubei.

“Because there’s an ... incubation period at play here, if they head out, for example, to cities in the north of China then it’s highly possible they will infect those areas, too,” he said.

While vehicles are not allowed over the bridge, it is still open to pedestrians. Police explained that people were still entering Hubei and they could still get out, but only in “special circumstances.”

Those include people who were in Hubei but booked train tickets to leave from Jiujiang before the Lunar New Year.

“Everyone’s panicking right now but I think things are not that bad,” migrant worker Guan, 45, told Reuters after crossing from Hubei.

Another man told Reuters that he had driven to the bridge from Jiujiang with his friend, who was returning home to Hubei, a province of about 60 million people.

“But once you get back you cannot come out again,” said the man, who gave his surname as Tian. “You have to stay there, stay at home. You can’t come out.”

The epidemic, believed to have originated in a seafood market in the Hubei provincial capital of Wuhan, prompted the WHO to declare a global emergency on Thursday, only the sixth time it has done so.

Trains and other public transportation have been suspended, roads have been sealed off and checkpoints established at tollgates around Wuhan, and the special measures have been extended to other cities in Hubei province.

Though Jiujiang itself has not officially been locked down, its streets were mostly deserted and its tourist sites closed on what was officially the last day of China’s Lunar New Year celebrations on Thursday.

“You know before during this (holiday) time a taxi driver’s business would definitely be good because during Spring Festival lots of people come home to be with their families,” said local taxi driver Guo Dongbo, 59.

“But this year, because there is this epidemic, we are all just following what the government has asked us to do. That is, we’re at home almost all the time. We don’t go out and nobody else is out on the streets either.”

In one of the residential areas of Jiujiang, a city of nearly five million people, a man carried a loudspeaker playing a recorded message ordering anyone who has been to Hubei recently to go and register with the local residents committee.

By Friday, the city had 42 confirmed cases of infection.
Elsewhere, shops were mostly shuttered, and the few restaurants that remained open were mostly empty.

“Normally at this time of year a lot of people come here. Now there’s nobody,” said one vegetarian restaurant owner near the Donglin Buddhist temple in Jiujiang.