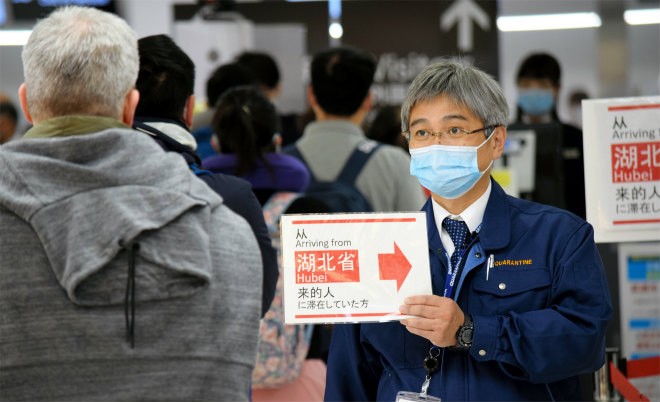 A Japanese quarantine officer holds up a sign asking travelers form China if they have visited Hubei province, whose capital is Wuhan, at Narita Airport in Chiba Prefecture on Feb. 1. (Yoshifumi Fukuda)

Three repatriated Japanese from Wuhan, the center of the coronavirus outbreak in China, have been confirmed to be infected by the virus, bringing the number of cases in Japan to 20, according to the health ministry on Feb. 1.

One of the three, who was aboard a flight chartered by the Japanese government from Wuhan on Jan. 29, tested positive in a follow-up check after initially testing negative upon his return to Japan.

The man, who is in his 40s, said he began coughing from Jan. 26, according to the ministry.

He was hospitalized shortly after his arrival at Tokyo’s Haneda Airport due to a cough and a fever exceeding 37 degrees.

His infection was not confirmed in the initial test using mucus taken from his throat.

He was later diagnosed with pneumonia. His infection with the new coronavirus was confirmed through examination of his sputum to detect the virus in his lungs.

The new coronavirus, which causes a pneumonia-like disease, tends to be detected in the lower respiratory tract such as the lungs, according to experts. The other two new cases of the infection concern a man in his 30s and another in his 40s, both of whom returned to Japan on the third charter flight on Jan. 31.

The man in his 30s tested positive despite an absence of any symptoms of the infection, according to the ministry.
So far, there are five such confirmed cases in Japan.

As the infection spreads to more than 20 countries beyond China, Japan tightened immigration procedures at its airports and ports around the country on Feb. 1.

At Narita Airport, a key gateway to Japan, employees of the health ministry’s Narita Airport quarantine station hoisted placards to steer travelers from mainland China, Hong Kong and Macao to a dedicated lane.

There they showed those passengers a sign bearing the characters of Hubei province to separate those who recently stayed in the province, whose capital is Wuhan, from those who have not for a separate quarantine and passport control.

According to the quarantine station, officers will hand a blue card to travelers who have not visited Wuhan in the past two weeks and a red card to those who have visited the city over the same period.

Foreign nationals who are given a red card will be denied entry to Japan, in principle.

Thermographic inspections have been conducted at Japanese airports since before the recently tightened immigration procedures to identify potential patients.

Japanese returnees from Wuhan have been roiled by the lack of suitable facilities to accommodate them.

After their arrival at Haneda Airport, those without symptoms such as a cough and fever have been sent to five facilities in Tokyo and Chiba and Saitama prefectures arranged by the government for a two-week follow-up examination.

So far, 565 Japanese were repatriated from Wuhan on three government-sponsored flights from Jan. 29 to Jan. 31.

On Feb. 1, about half of the passengers were moved by bus from their initial accommodations to the Wako campus of the National Tax Agency’s National Tax College in Wako, Saitama Prefecture, just north of Tokyo. The facility offers a private room with a bath and toilet.

The Cabinet Secretariat said the transfer is aimed at addressing such inconveniences as having to share a room with another returnee and to improve the overall living environment.

But some returnees were forced to move to the facility in Wako only a day after their stay elsewhere arranged by the government.

Before the transfer to the Wako facility, those sent to the government’s training facility for its employees in the capital’s Kita Ward had to share a communal bath.

Some who were assigned to a hotel in Katsuura in Chiba Prefecture had to share a room there.

Some preferred moving to the Wako facility as smoking was prohibited at their accommodations at the National Institute of Public Health, also in Wako.

The spread of the new virus has alarmed students and university officials, coming in the season of entrance examinations.

Meiji Gakuin University in Tokyo ran a notice at its website on Jan. 30, ahead of the start of the exam on Feb. 1, urging test takers and staff supervising them to wear masks to maintain a safe environment at the test venue.

Waseda University in Tokyo is considering handing out masks to applicants if they request one.

Professional baseball teams are also taking precautions against the virus by encouraging their players to wear masks when they interact with fans during their spring training camps.

Players with The Hanshin Tigers, which opened spring training in Ginoza, Okinawa Prefecture, on Feb. 1, donned masks when they had exchanges with fans.