Armed with face masks, Japanese trickling back to China for work 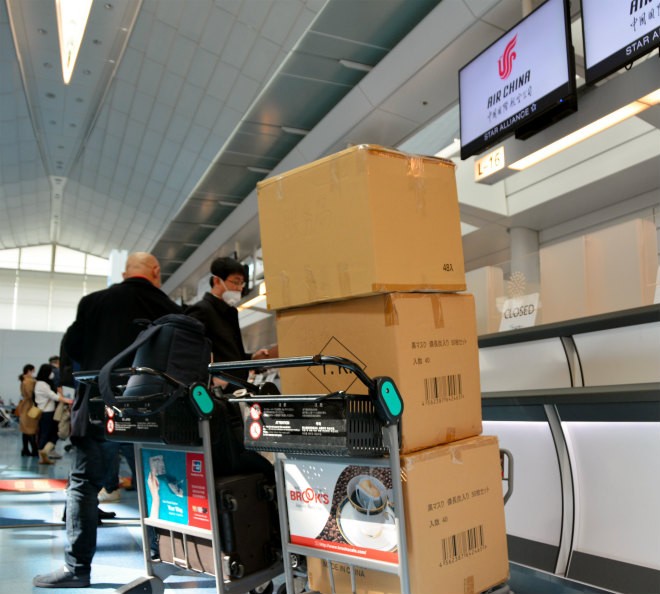 A passenger checks in boxes filled with face masks in preparing to board an Air China flight for Beijing on Feb. 3. (Shingo Tsuru)

A 29-year-old Japanese man at Haneda Airport boarded a flight to China on Feb. 3 with a suitcase filled only with face masks.

The man, who works at a rubber parts factory in Guangdong province, faces an uncertain business future and heightened risk of infection from the new coronavirus spreading in the country.

But like many other Japanese at Haneda Airport, who had also stuffed a large number of face masks into their luggage or check-in boxes, he returned to China after the end of the Lunar New Year holidays out of a sense of responsibility.

The man had been on a five-day business trip in Japan, where he bought up as many face masks as he could.

He said he always wore a face mask when meeting those who knew he was back from China but was still “treated like a germ.”

He said he plans to distribute the face masks to the 100 or so workers at the factory.

However, he is also worried about whether the factory will be able to resume operations as planned on Feb. 10. A final decision must await what the Chinese government says about business activities.

“The lives of the workers depend on it, so I hope plant operations can resume as soon as possible,” the man said.

A 51-year-old president of a Chinese subsidiary of a Japanese chemical company boarded a flight for Shanghai on Feb 3.

He has been working in China for two years while his family remains in Japan.

Company headquarters at one time sent out a notice ordering all 100 or so Japanese employees in China to return to Japan. But with the end of the Lunar New Year period, executives at the various locations in China have been told to go back.

The subsidiary president said his family did not want him to go, fearing he would become infected with the coronavirus.

“There are about 50 Chinese employees at the subsidiary, so as a person in a position of responsibility, I feel I must return,” he said.

He was also concerned about reports that distribution channels in China have been disrupted and that face masks sent from Japan to Shanghai were not reaching their destination.

“I want to take measures in a calm manner,” he said.

Kosho Kato, 63, of Tokyo’s Shinagawa Ward, took a flight to China for a different type of business: a wedding ceremony in Hong Kong.

He bought the airline ticket two months ago, when he never expected the coronavirus would turn into such an epidemic.

His father and four siblings who live in Hong Kong told him he didn’t have to come, but he visited 10 drug stores in Japan to buy face masks and alcohol disinfectant spray.

“I am worried, but I want to deliver the face masks to my family,” Kato said.

According to the transport ministry, 1,623 round-trip flights were scheduled between Japan and China, excluding Hong Kong and Macao, for this week. But the spread of the coronavirus has led to the cancellation of about 500 round-trip flights, and the number of flights had decreased to two-thirds of the planned level within three days.

Jetstar Japan Co., an operator of a low-cost carrier, announced on Feb. 3 that the one daily round-trip flight between Narita Airport and Shanghai would be canceled from Feb. 5 until March 28.

Other carriers are expected to cancel their flights from next week.