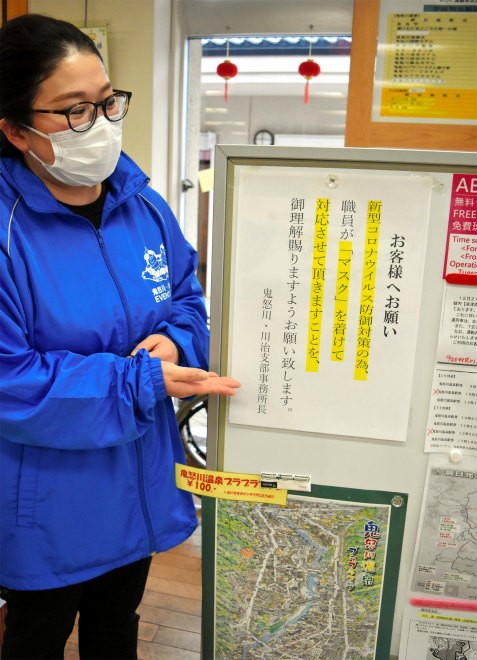 A notice asks visitors for understanding as tourism officials don masks to guard against the spread of the new coronavirus at the Kinugawa hot spring resort in Nikko, Tochigi Prefecture, on Jan. 27. (Takashi Kajiyama)

Tourism and retail industries are reeling from the spread of the deadly new coronavirus as hundreds of thousands of Chinese tourists are canceling their group tours to Japan.

The number of Chinese canceling their reservations through March reached 400,000, according to a study by the Japan Association of Travel Agents (JATA), an industry group.

The figure would rise further if Chinese travelers who had planned to come to Japan on personal and business trips are counted, the JATA added.

The outbreak of the virus causing a pneumonia-like disease in Wuhan in central China came right before China’s Lunar New Year holiday from Jan. 24 to Jan. 30, when Chinese travel in and out of the country in huge numbers.

Their absence has impacted the bottom lines of Japanese hotels and department stores, which rely on the spending power of Chinese tourists.

Shizuoka Prefecture, with renowned hot springs and scenic spots, is one of hard-hit prefectures, with Chinese accounting for 60 percent of its foreign visitors.

A Japanese-style inn in the Kanzanji hot spring resort in Hamamatsu in the prefecture reported that there are no reservations from Chinese guests on group tours for February and March.

“This is really unfortunate as Chinese tourists have begun staying in our inn only recently,” a female employee lamented.

Japanese department stores that expected a massive arrival of Chinese tourists are seeing a dent in their sales.

Chinese account for about 80 percent of the purchases by foreign visitors at the three leading department stores--Daimaru-Matsuzakaya, Takashimaya and Mitsukoshi-Isetan.

With the stream of Chinese shoppers thinning, their respective sales during the Lunar New Year holiday this year all fell from levels a year ago.

In particular, Takashimaya Department Store reported a decline of 14.7 percent, the sharpest of the three department stores.

Things are worsening at Takashimaya as the drop has expanded to 30-40 percent from 2019 since Jan. 29.

If a ban on group tours overseas imposed by the Chinese government continues for six months, it would translate into a decline of 295 billion yen in spending in Japan and a drop of 0.05 percent of the Japanese gross domestic product, according to an estimate by SMBC Nikko Securities Inc.

Some department stores are even bracing for the fallout to spill over into consumption by Japanese shoppers.

“If the Wuhan coronavirus outbreak takes longer than initially thought to contain, Japanese may hole up in their homes to avoid the risk of exposure,” said a department store official.

(This article was written by Naoyuki Takahashi and Yoshikatsu Nakajima.)