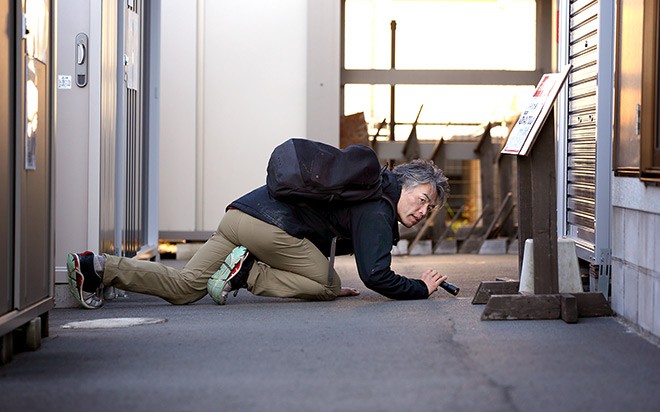 Hiroshi Fujiwara’s job often requires him to forget that he is a human and to think and behave like a cat.

It’s a skill he started developing in his childhood, which was filled with creepy-crawlies and a spell of overnight stays outdoors with stray animals.

Fujiwara, 50, is a detective who specializes in locating missing pets, including dogs, cats, rabbits and other mammals. He has also been hired to find parakeets, snakes and Japanese rhinoceros beetles.

Fujiwara said fewer dogs now disappear because they are increasingly being kept indoors. However, the number of missing feline cases has risen because they keep finding ways to slip out through doors and windows, he said.

In January, Fujiwara received a report from a 41-year-old man and his mother, 70, whose black cat ran off after being surprised by a loud noise at a hardware shop in Kisarazu, Chiba Prefecture.

After gathering details, Fujiwara first looked for the cat around the store and then widened his search to the surrounding residential areas.

He thought the animal “might want to avoid the shop where it had heard the terrifying sound.”

The detective asked residents at homes with tool sheds and verandas to allow him to probe the nooks and crannies with a flashlight.

He bent his knees and contorted his body like a cat to peer into the dark spaces and listen for sounds.

Although the cat owners had created a different poster, Fujiwara’s featured a larger photo of the missing pet and fewer words.

“Owners tend to write more, but those who see the posters cannot remember so many things,” he said.

Five days later, an individual contacted Fujiwara to inform him about a black cat in a residential area. The cat-spotter had seen one of Fujiwara’s posters in the neighborhood.

The owners rushed to the scene, and the mewing cat jumped out of hiding, apparently lured by their voices.

The cat appears to have crossed a four-lane street between the residential area and hardware store.

Although felines typically fear such wide roads, some have the courage to cross them, depending on the situation.

Fujiwara explained how he determined that the cat may have crossed the road.

“Thinking like a cat as much as possible is important,” he said.

Animals have been a big part of Fujiwara’s life.

In his hometown in Hyogo Prefecture, he was a close observer of ladybugs in their winter slumber and lizards under the ground.

He released spiders in his home that proliferated and created an arachnid infestation on the ceiling.

One time at school, he caused a fuss when a snake emerged from his pocket.

Fujiwara ran away from home in his third year at junior high school and spent nights in parking lots and other outdoor locations.

Sleeping with dogs and cats as his companions, he became aware that the sounds of human footsteps can be terrifying to the animals.

“The experience at that time contributes to my work now,” Fujiwara said.

When he was around 26, Fujiwara was engaged in prawn culture in Okinawa Prefecture.

His pet dog tended to wander off at night, and Fujiwara often had to look for the canine.

Then one night, he dreamt that he was an animal searcher. He woke up thinking that such an occupation “must match me perfectly.”

So Fujiwara headed for Tokyo in 1995 to become a pet detective, a field in which few people worked.

In his first case, a woman asked Fujiwara to rescue a stray cat that had fallen under blocks for river revetments. He descended to the riverbank and retrieved the terrified animal.

The woman was so pleased with the result that she asked him to find a pet cat of her own.

Fujiwara also said he can never forget the time three years ago when he found cat siblings that disappeared the day after the owner had moved to a new place.

The two felines were spotted seven months later; they had separately traveled 2 kilometers in the direction of their former home.

“The direction they followed was correct,” Fujiwara said. “I was very impressed by the cats’ abilities to survive.”

But he says some pets are found dead.

“I occasionally regret my decisions, such as not having turned left at one point,” he said.

With more requests for his services coming in, Fujiwara released free online manuals last autumn to help owners locate their missing cats and dogs in the early stages.

“Whether their pets can be found could change the course of life of the owners,” Fujiwara said. “I want the manuals to help find as many pets as possible.”

Fujiwara is now working on more detailed manuals to release.