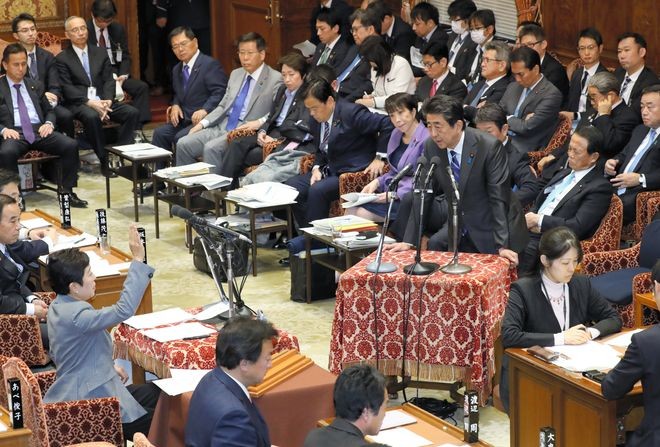 During early Diet debate in the regular session, Prime Minister Shinzo Abe attended Budget Committee meetings of both chambers on eight days to answer questions about, among other issues, allegations concerning the cherry blossom viewing parties he hosted.

But his answers to the allegations that he abused the annual event for his personal gain were linguistic chicanery that did nothing but cloud the debate on the matter.

This scandal has a direct bearing on the credibility of the administration. It is hardly surprising that it was a major topic during these sessions along with the new coronavirus epidemic and the dispatch of the Self-Defense Forces to the Middle East.

Abe should still be peppered with questions about the event because he has continued giving insincere answers that indicate no intention to clear up the allegations.

Abe’s efforts to avoid political damage from the allegations through sleight of mouth have reached their limits.

One good example is his answers to funding questions concerning banquets at a Tokyo hotel held on the eve of the cherry blossom viewing event that was held every year and sponsored by Abe’s support group.

One key question is why the expenses for these dinner parties were not mentioned in Abe’s legally required political funding reports despite being organized and sponsored by his support organization.

Abe has claimed that the expenses related to these banquets were not reported in the financial documents submitted to the authority because the support group was not financially involved and each participant paid 5,000 yen ($45.50) as the participation fee directly to the hotel.

When asked by an opposition lawmaker who made the contract with the hotel, Abe said individual participants, instead of his support group, did so.

But his claim that each of the about 800 participants individually made a contract with the hotel defies common sense. Abe’s reply seems to be a strained explanation to avoid the accusation that his support group’s money transactions were not reported.

During a Lower House Budget Committee session, Kiyomi Tsujimoto, a lawmaker of the Constitutional Democratic Party of Japan, called this approach the “Abe method” and asked the prime minister whether it can legally be used by other legislators as well.

Abe had no choice but to say it should raise no concern if done in the same fashion.

It is extremely irresponsible of Abe to approve of such an act, which would effectively strip the teeth from the Political Funds Control Law, which is aimed at injecting transparency into political funding.

The government has refused to answer various questions about the cherry blossom viewing parties under the pretext that the lists of the invited guests have been destroyed.

The administration has said that the digital data about the invitees have also been destroyed. It has rejected the opposition demand that the computer’s history file be checked to identify the date of the data deletion, saying the step could “encourage illegal access” to data in the computer.

In explaining the government’s refusal to check the file, Chief Cabinet Secretary Yoshihide Suga said the National Security Secretariat is also using the same computer system. Suga argued that the step could increase the risk of leaks of “state secrets.”

But it is hard to believe that only publishing the date of the data deletion would endanger any state secret. This is another lame excuse the government has been forced to make because of so many strained explanations it has given about the scandal.

At the outset of his policy speech to open the current Diet session in January, Abe trumpeted his policy achievements, saying that the seven years of his administration’s policy efforts have “completely broken” what he called the “wall of resignation,” or the widespread belief that Japan can no longer achieve strong economic growth.

But Abe appears to be trying to build another “wall of resignation.” He seems to be waiting for opposition attacks on the various scandals that have hit his administration to subside by making makeshift excuses to buy time.

This wall should also be broken completely.