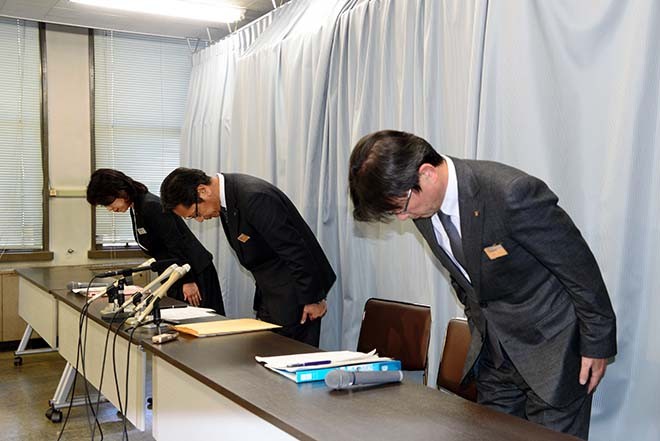 Aichi prefectural officials apologize at a news conference in Nagoya on Feb. 4 for a scandal in which social welfare officers abandoned an elderly man in a park in mid-January. (Sayaka Emukai)

NAGOYA--Stunned Aichi prefectural government officials have apologized after social welfare officers abandoned an elderly man in a park on a cold winter night instead of providing him shelter and even lied to police.

The man, who has since been hospitalized, is suspected of having suffered a cerebral infarction.

“It was such a horrendous act, and I will punish those involved severely,” Aichi Governor Hideaki Omura said at a news conference at the prefectural government office on Feb. 4.

According to the prefectural government, police were notified that a man in his 70s was trying to use an ATM machine without a cash card at a supermarket in Oharu town in the prefecture on the evening of Jan. 17.

The septuagenarian man could neither talk nor communicate by writing.

Two employees of the center’s community welfare and service division, a male in his 50s and a female in her 20s, took him to an inexpensive lodging house in the town.

But the lodging staff said the man couldn’t stay there because they were concerned about his health.

The lodging staff summoned an ambulance. The ambulance crew called neighboring health-care facilities but couldn’t find a place that would accept him. The man was deemed “unnecessary for emergency transport.”

After 11 p.m., the two welfare center employees phoned their superior, a male in his 50s, asking what to do with the man.

The superior, who works at the same division and is at the rank of assistant division chief, instructed them to take the man outside the jurisdiction of the fire station they had called earlier, then call an ambulance without giving their names.

Following their superior’s instruction, the two drove an official government vehicle to a park in Nagoya’s Nakamura Ward at midnight.

They woke up the man, who had fallen asleep on the ride there, and made him sit on a bench in the park. The man tried to stand and fell.

The male employee called the emergency number from a public phone, pretending like he was a concerned citizen just passing by.

“There is an elderly man lying in the park on the ground,” he said and requested an ambulance.

Then, the two left, abandoning the man.

The Nagoya City Fire Department came to the assistance of the man, and the Nakamura Police Station in Aichi Prefecture took over the matter.

According to the Nagoya Local Meteorological Observatory, the temperature in Nagoya at the time was about 6 degrees.

Police grew suspicious of the fact that the elderly man who had been placed in the custody of the welfare center was later found in a distant park in Nagoya.

On the morning of Jan. 18, police summoned the male employee who made the emergency call and his male superior to appear separately at the Nakamura station for questioning.

The two had cooperated in fabricating a story, telling police that the man had left the cheap lodging house in Oharu on his own and that the employees lost track of him.

On Jan. 28, police summoned a deputy director of the welfare center and pointed out the numerous inconsistencies in the employees’ statements.

The three employees involved in the abandonment then confessed and told the deputy director and the police what had actually transpired.

The three said they didn't take the man to a hospital because they "lost their heads and couldn't think of (the option) at all," according to the prefectural government.

The elderly man’s family filed a missing person’s report with police on Jan. 19.

On Jan. 24, police identified the man, who is a resident of Oharu.

According to the prefectural government, when an unidentified person is taken into a custody, social welfare staff need to ask a nursing home or lodging house to take the person in.

According to prefectural officials, the two explained: “We didn’t have any experience in handling an unidentified person after hours. We couldn’t find a facility to accommodate him, either. So we just did what our superior told us to do.”

The superior admitted, “I did something wrong,” according to the prefectural officials.

Omura said, “It is a matter of grave significance since it affects people’s lives.”

He said the government will continue working to verify the facts of the case.

(This article was written by Sayaka Emukai and Yosuke Hiruma.)