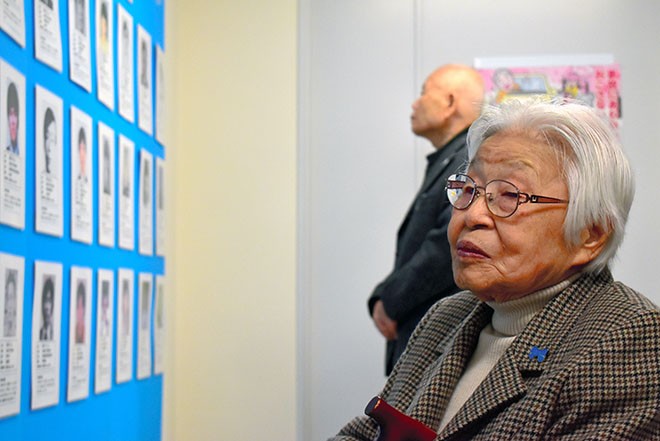 Kayoko Arimoto, front, with her husband, Akihiro, looks at panels at an exhibition on the abduction issue in Kobe’s Chuo Ward in December 2018. (Asahi Shimbun file photo)

Kayoko Arimoto, who spent decades fighting to find her daughter who was abducted by North Korea in the 1980s and bring her safely back to Japan, died on Feb. 3. She was 94.

Arimoto, her 91-year-old husband, Akihiro, and others never abandoned hope of one day seeing Keiko again. But the day never came for Arimoto.

In 1983, Keiko, Arimoto's third daughter, disappeared at the age of 23 while studying in London.

In 1988, the Arimotos learned that she was, in fact, in North Korea, through a letter that Toru Ishioka, another abductee, wrote to his family.

Ishioka, who was from Sapporo, was kidnapped while staying in Europe. In the letter, he wrote he was in North Korea with Keiko.

Since then, Arimoto and other families of abductees, including the parents of Megumi Yokota, have established a network to urge the central government to bring back their loved ones to Japan.

In 2002, Arimoto received corroboration that Keiko had been kidnapped by North Korea.

The bombshell came at the trial of a former wife of a Japanese Red Army member who had lived in exile in North Korea after participating in the hijacking of a Japan Airlines domestic commercial flight.

The defendant, who was charged with an array of offenses including violating the Passport Law, said Keiko had been tricked into going to North Korea under false pretenses.

That same year, then Prime Minister Junichiro Koizumi visited North Korea, and was told by North Korean officials that Keiko “had been declared dead.”

But the death certificate that North Korea provided contained a number of suspicious points, including getting Keiko’s birthdate wrong.

In June 2018, she watched the U.S.-North Korea summit on television at home, hoping that the top-level meeting would help resolve the issue of North Korea's abductions of Japanese citizens.

In December the same year, the Hyogo prefectural police held a panel exhibition on the abduction issue in Kobe’s Chuo Ward that Arimoto attended with her husband.

“It has taken such a long time,” Arimoto told reporters at the time. “I long to see Keiko, just a glimpse (of her).”

Her hopes were raised in June 2019 after she received a letter of encouragement from U.S. President Donald Trump.

“I am optimistic that the situation may change with President Trump,” she said, expressing gratitude for his message.

But pledges and words of support from world leaders have failed to bring Keiko home to Japan.

“In order to bring Keiko back, my wife and I have worked together and tried our best, while receiving encouragement and support from Prime Minister (Shinzo) Abe and many other people,” Akihiro said in a statement issued through family supporters. “But, now, it exhausted my wife of every bit of her strength. It's impossible for me to sort out my feelings over it.”