Taiwan, China argue over flights for stranded Taiwanese in Wuhan 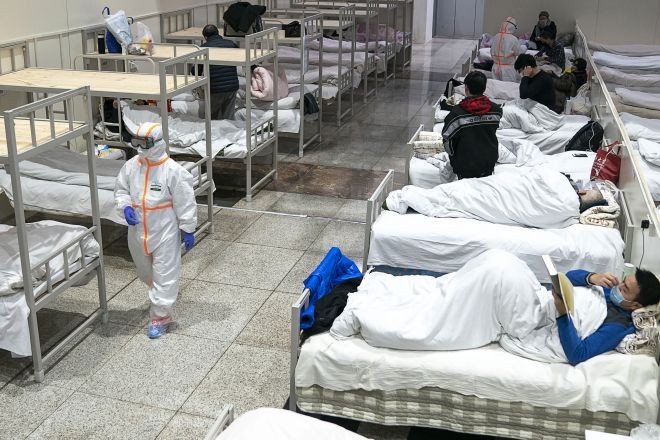 A medical worker in a protective suit walks by patients diagnosed with the novel coronavirus at a temporary hospital which was transformed from an exhibition center in Wuhan in central China's Hubei province on Feb. 5. (Chinatopix via AP)

TAIPEI--Taiwan and China are embroiled in a new spat over the fate of Taiwanese stranded in the Chinese city of Wuhan, the coronavirus epicenter, after Taiwan said one of its citizens sent back on the first flight was infected with the disease.

Only one flight from China, which claims Taiwan as its own territory, has so far evacuated 247 of the estimated 500 Taiwanese caught up in China’s preventative lockdown of Wuhan.

Beijing has permitted countries from the United States to Japan to send often several flights to Wuhan to collect their nationals.

But Taiwan and China have been unable to agree on further flights to take out the Taiwanese.

Taiwan’s China policy-making Mainland Affairs Council said the first flight back, on Monday, had one passenger confirmed to be affected and three others who had fevers.

All the passengers are now in quarantine in Taiwan.

The presence of the sick passenger “created a tear in virus prevention,” the council said in a statement on Friday.

“This also caused an overlap infection risk for the people on the same flight, and if there are even more infected people caused by this then the serious consequences don’t bear thinking about.”

China should be prioritizing the elderly, the young and other vulnerable groups amongst the Taiwanese and those only on short-term visits to Wuhan to send back first, but China ignored this request when it returned the first batch, it added.

China, for its part, says Taiwan should not be putting up obstacles to evacuate the Taiwanese, and further planned evacuation flights this week had been put off due to Taipei blocking them.

“Some people in Taiwan had been bad-mouthing arrangements for the homecoming of Taiwan compatriots, which has fully exposed the vile nature of their ignoring of the Taiwan compatriots’ interests,” China’s Taiwan Affairs Office said late on Thursday.

Taiwan should stop its “political games” and let the flights resume, it added.

Taiwan and China are already at loggerheads over the handling of the virus outbreak, especially over Taiwan’s exclusion from the World Health Organization (WHO).

China says Taiwan is part of China and has been provided with timely information on the virus. Taiwan says that is not true.