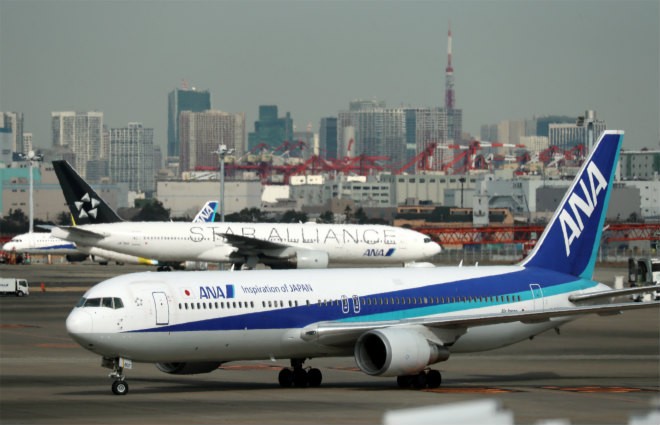 The All Nippon Airways jet chartered by the governments lands at Tokyo's Haneda Airport on Feb. 7 carrying 198 passengers from Hubei province in China. (Shogo Koshida)

The fourth government-chartered flight from the coronavirus epicenter of Wuhan landed at Tokyo’s Haneda Airport on Feb. 7 carrying for the first time spouses without Japanese passports.

A total of 198 residents of Hubei province, where Wuhan is located, were on the All Nippon Airways flight. In addition to 119 Japanese aboard, 79 were spouses who had passports issued in China and Taiwan.

A total of 763 people have taken advantage of the charter flights that began on Jan. 29.

“A large majority of Japanese residing in Hubei province and who wanted to return to Japan have been brought back,” Chief Cabinet Secretary Yoshihide Suga said at his morning news conference on Feb. 7.

He said only a few people who want to return remain in Hubei, which has been hit hardest by the coronavirus outbreak. While he said several dozens of Japanese also made it clear that they wanted to remain in China, Suga said every effort would be made to bring back all Japanese who want to return.

Among the 198 on the fourth charter flight, 51 were 6 years old or younger, while nine were 60 or older.

Most were from areas of Hubei province outside of Wuhan, with 80 having resided in Wuhan while the other 118 were from the rest of the province.

Suga said that the non-Japanese passengers on the fourth flight would not have to pay airfare since they were all related to those who hold Japanese citizenship.

Meanwhile, Prime Minister Shinzo Abe on Feb. 7 received recommendations from his ruling Liberal Democratic Party on dealing with the coronavirus. He said the government would announce emergency measures next week as well as use government funding to cope with the outbreak.

“The government will also take every measure to deal with the problems that have arisen in local economies as a result of reduced tourism,” Abe said.